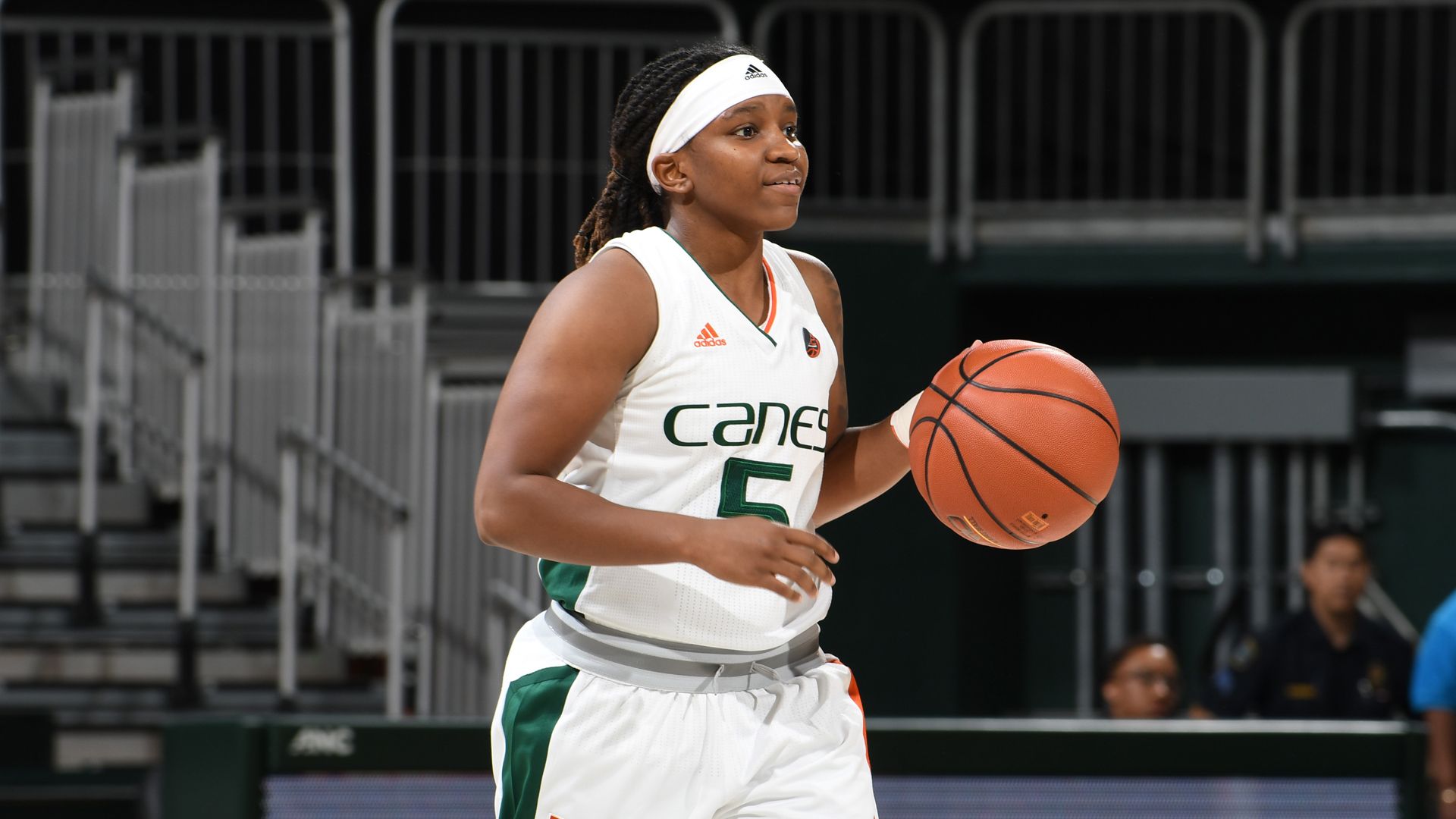 By Alex Schwartz
HurricaneSports.com
CORAL GABLES, Fla. – The University of Miami women’s basketball team turned in a dominant 85-39 victory over Bethune-Cookman Thursday night at the Watsco Center in its final non-conference game of the season.

Freshman guard Mykea Gray had her fourth 20-point outing of the year, tallying a game-high 24 on 8-of-12 shooting despite not playing in the fourth quarter, as Miami (10-3) notched its fifth consecutive win.

“Bethune had played six possessions of zone this year so far—six possessions, not six minutes, of zone,” Miami head coach Katie Meier said. “So, we were not expecting that zone, but Mykea found the gaps early and her shot looked great. So, for us to respond to seeing a zone that we weren’t expecting and shooting 40 percent from three was really important.”

Gray opened the game with back-to-back 3-pointers, as the Hurricanes quickly charged out to a 28-9 lead through one quarter of play.

Miami continued to dominate in the second period and stretched its advantage to 34 points, 45-11, at the intermission. The 11 points were its fewest conceded in a half this season, while the two points it allowed in the second quarter tied a program record.

Gray scored 19 points in the first half, tying her own mark against FIU in the season opener, for the most in a half by a Hurricane this season. In the first 13 minutes and 43 seconds, Gray scored 16 points on 6-of-7 shooting from the field, while Bethune-Cookman (8-4) had nine points on 3-of-18 shooting.

Although the Wildcats improved offensively in the third quarter, Miami still managed to extend its advantage. Gray started the session with a 3-pointer and senior forward Keyanna Harris closed it with a contested basket in the final seconds, as the Hurricanes led, 65-27, through 30 minutes.

The Hurricanes pushed their edge to a season-best 52 in the closing minutes, but Bethune-Cookman scored the final six points and Miami finished with its second-largest win of the year, 46 points, while logging its top point total.

The Wildcats totaled 19 points fewer than their prior lowest mark of the campaign and their lowest total since posting 34 at Clemson on Dec. 29, 2016.

“We did respect Bethune-Cookman a lot. They’ve played some big-time opponents and they played them tight or they beat them,” Meier said. “I think that there was a momentum and toughness to us that we didn’t have in Puerto Rico. I think that they are glad to be home and glad to get our pace back up. “

All 10 Hurricanes who played scored at least four points and Harris tallied five steals, her fourth time reaching that number this year.

Three Wildcats finished with seven points, as Miami did not allow an opposing player to reach double figures for the first time in 2017-18.

The Hurricanes forced 28 turnovers and registered a season-high-tying 17 steals en route to posting a 30-4 edge in points off turnovers, to go along with a 32-15 advantage in bench points.

“Bethune-Cookman is a good team and our players just took them out of what they wanted to do,” Meier said.

– The Hurricanes improved their all-time record against Bethune-Cookman to 9-1, winning for the seventh straight time in the series.
– Miami’s 28 points in the opening frame tied for its second-most in a period this season, trailing only the 29 it scored in the third quarter against Maine.
– This was the third time in the three seasons since the NCAA went to a quarter system Miami has allowed just two points in a period, along with Dec. 19, 2016 in the third against Coppin State and Feb. 7, 2016 in the second versus Duke.
– Thursday marked the third time this season Miami has reached 80 points, joining its 80-point showing against Maine and its 82-point performance versus Sacramento State.
– Redshirt senior guard/forward Shaneese Bailey surpassed 1,750 minutes played as a collegian.