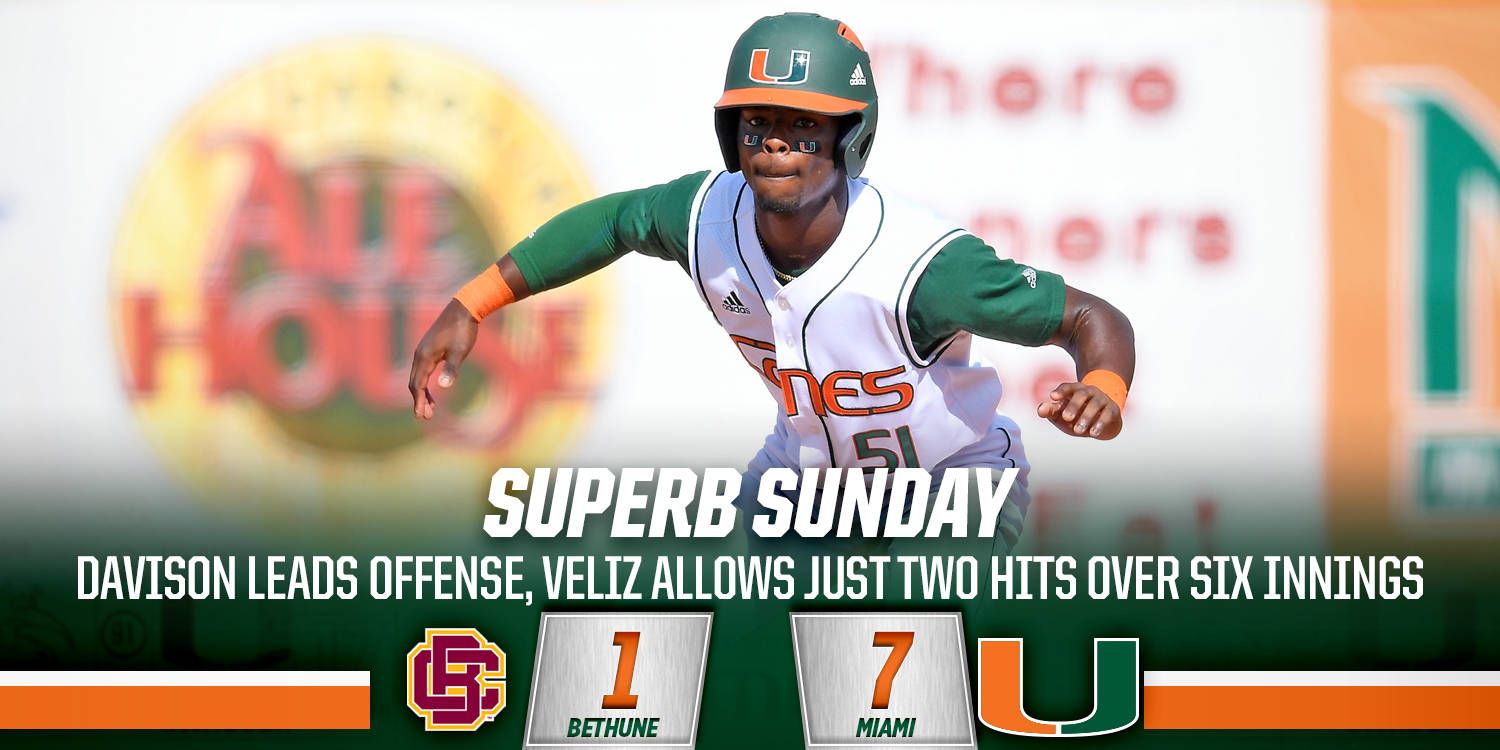 CORAL GABLES, Fla. – Freshman Greg Veliz delivered a dominant start on the hill, senior Johnny Ruiz hit his third home run of the season, and Miami captured another series victory with a 7-1 win over Bethune-Cookman Sunday.

Making his second official start as a member of the weekend rotation, Veliz (4-3) tilted the rubber match in Miami’s favor with six strong innings.

Including a split of a weather-shortened two-game set against Florida State in late April, Miami (24-23) has not lost a series in the second half of the season.

Ruiz provided all the offense the Hurricanes needed with a two-run blast in the third inning.

With the game tied 1-1, the senior captain crushed a 2-2 pitch from Bethune-Cookman righthander Tyler Krull well over the fence in right-center to end the sophomore pitcher’s outing early.
Krull (5-2) allowed four hits and three runs in 2.0+ innings. He walked two and faced just 11 batters before being removed in favor of Donte Lindsay.

Junior Hunter Tackett opened the scoring in the bottom of the first with a sacrifice fly that plated junior James Davison, who singled to open the inning.

The Wildcats (27-23) tied the game in the third on one of Veliz’ only mistakes on the day – a two-out RBI double by Demetrius Sims off the wall in right.

Though the Ruiz homer helped Miami regain a lead in the home half of the same frame, the Wildcats looked poised to cut into the 3-1 deficit when Jameel Edney was hit by a pitch and slugger Danny Rodriguez singled to put two runners on with no outs in the fourth.

Veliz buckled down, however, striking out Austin Garcia and inducing an inning-ending double play to keep the Hurricanes ahead.

The talented righthander, who went at least five innings for the eighth straight start, fanned at least one Wildcat in each of his first five innings and threw 96 pitches.

The Hurricanes plated four insurance runs over their final three trips to the plate to seal the win.

With his team already leading 3-1, sophomore Romy Gonzalez connected an RBI single in the sixth off B-CU reliever Joseph Calamita to make it 4-1.

An inning later, senior Joe Gomez pushed Miami’s lead to 5-1 with an RBI single that scored junior Carl Chester. Gomez scored on a throwing error charged to Wildcats catcher Jordan Stacy in an attempt to get Davison stealing.

Junior Michael Burns capped the game’s scoring with an RBI double in the eighth.

Sophomore Andrew Cabezas struck out four batters in two innings of relief, while junior Cooper Hammond, making his first appearance on the mound at Mark Light Field since March 2016, pitched a scoreless ninth.

The Wildcats threatened in the eighth, loading the bases on a walk and back-to-back singles. But Cabezas struck out two straight hitters and induced a fielder’s choice to end the threat.

The Hurricanes return to Alex Rodriguez Park at Mark Light Field Wednesday for a midweek game against UCF. First pitch for the contest, slated for broadcast on ACC Network Extra and WVUM 90.5 FM, is set for 7 p.m.