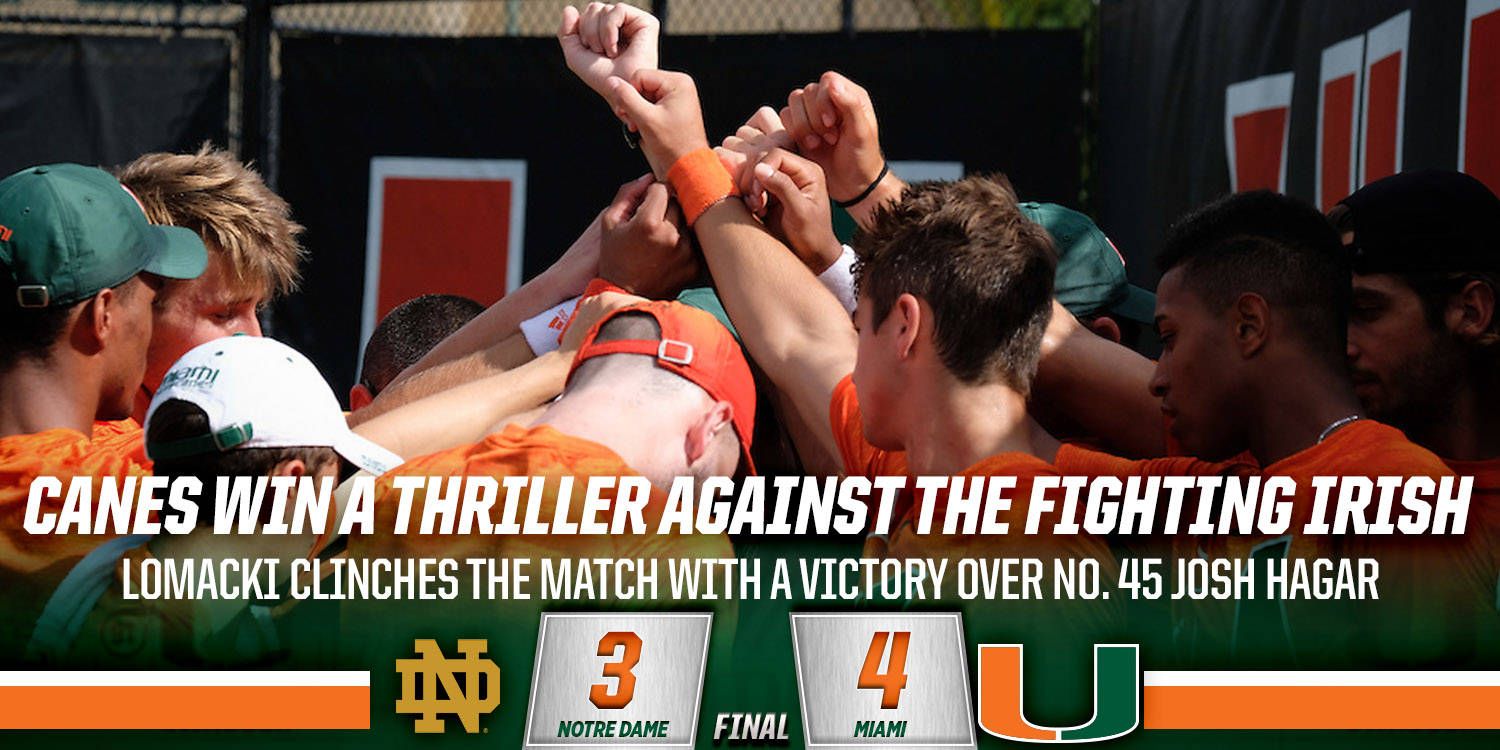 “It is great to get a W against a good Notre Dame team,” head coach Aljosa Piric said. “This whole weekend was great. We played Boston College a couple days ago gaining a little bit of momentum going into today’s match. We really showed up with great attitude and fight today. I am really pleased with the way we fought from doubles all the way through, one through six, singles.”

The Hurricanes (8-9, 2-6 ACC) opened the match strong with a pair of victories to take the one-point advantage and gain momentum into singles play.

At No. 3, junior Christian Langmo and sophomore Dane Dunlap got the day started with a doubles victory over the Notre Dame’s Grayson Broadus and Brendon Kempin, 6-3.

At No. 1, No. 56 seniors Max Andrews and Jesse Flores defeated the nation’s 24th-ranked doubles tandem Eddy Covalschi and Josh Hagar, 6-3.

“It’s really huge, because the catalyst for those have been our No. 1 team [Flores and Andrews]. They have been playing really well together. They did another great job today, getting a win for us,” Piric said on the meaning of earning the doubles point. “We have played well in doubles, really throughout the entire year and it definitely gives you a lot of momentum. But against good teams we haven’t been able to put singles together. However, today we showed up and we fought. And when we fight anything can happen. Today is the example of that.”

At No. 3, Andrews increased the Canes’ advantage to two points, when the senior earned a straight-set victory against Gamble, 6-1, 6-4.

Looking to seal the victory for Miami, Dunlap took the opening set against Grayson Broadus, 6-0. The sophomore came up short in the final two sets as Broadus earned the victory, 0-6, 6-4, 6-4. With the match evened at three points apiece everyone’s attention turned to court one in a battle between a pair of top-60 ITA singles opponents.

“I mean, it is great for Piotr to clinch. He has been the guy for us and for him to get this W and clinch the match for us is awesome,” Piric said. “But credit goes to the whole team. I really don’t want to take anything away from anyone. Christian played a tough three sets and won, which was huge for us, and Max played really well today. He really dug in deep and really that was the best match he has played all year. And down at Nos. 4, 5 and 6 we showed up and we fought. We came up short but the most important thing is that we fought and we gave ourselves a chance. And today went our way. We have to build on this and continue to get better.”

Next weekend the Hurricanes will return to the state of North Carolina, playing in their final scheduled road matches of the season. Beginning with a trip to Raleigh, N.C., April 14 at 2:30 p.m., the Canes will take on NC State. Miami will wrap up the weekend when it faces No. 43 Duke April 15 at 3 p.m., in Durham, N.C.

“It is really good to get this W and it gives us momentum going into a very important stretch against four tough teams; NC State, Duke, Virginia Tech and Virginia,” Piric said. “We are going to use this, build on this and continue to grow. We have talked about finishing strong and this is a great start to that.”