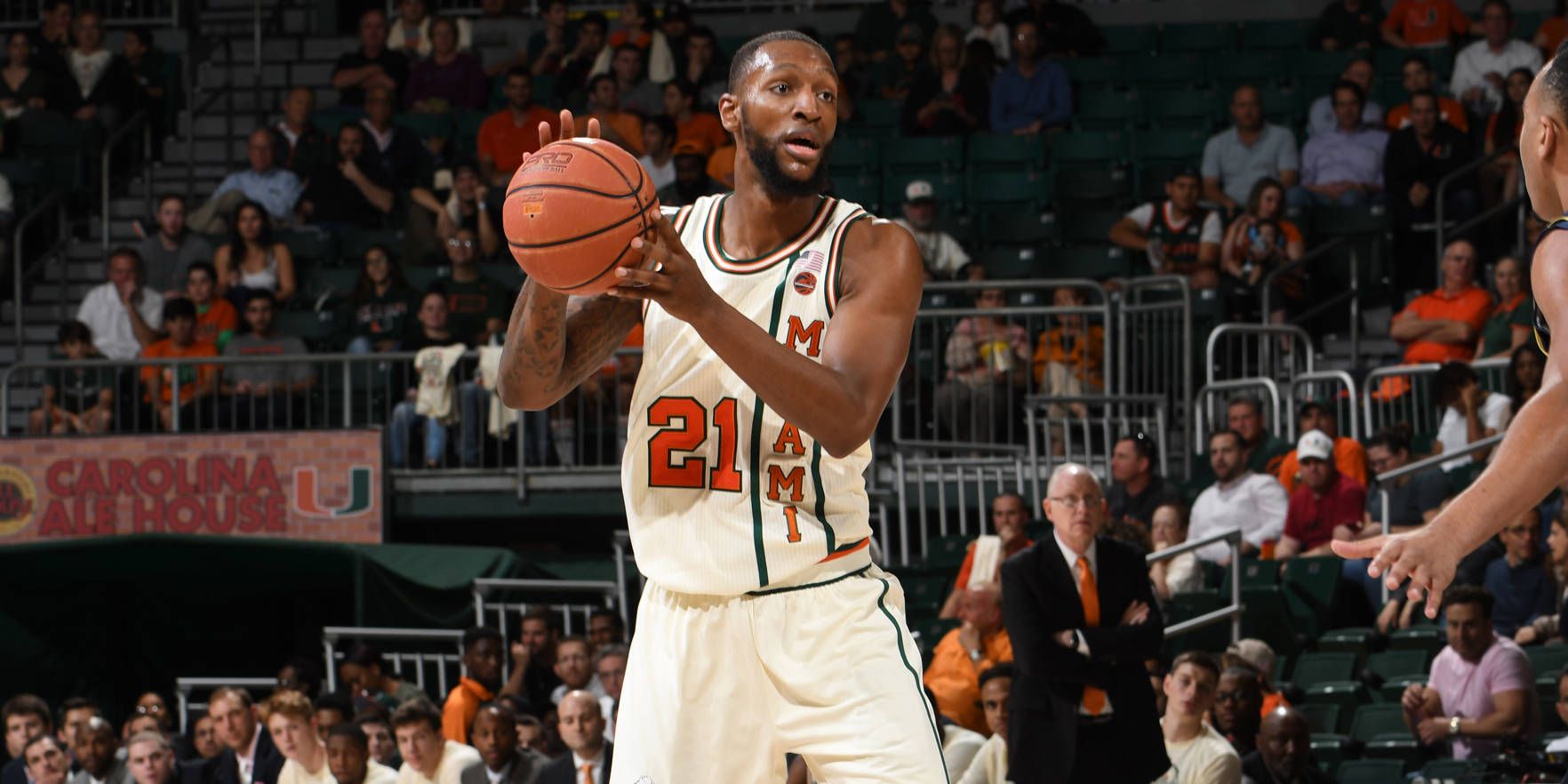 CORAL GABLES, Fla. (AP) – V.J. Beachem sank the go-ahead basket and made the clinching steal as No. 20 Notre Dame rallied from a four-point deficit in the final 2 1/2 minutes to beat Miami 67-62 on Thursday night.

The Fighting Irish (15-2, 4-0) outscored Miami 10-1 down the stretch to earn their sixth straight victory. Their four league wins have been by a total of 18 points.

“Our fan base is all on heart medication,” coach Mike Brey said. “I loved our mental toughness again to finish.”

“Obviously we have some experience there,” Irish junior Steve Vasturia said. “It’s a testament guys not being afraid to step up and staying confident. We’ve been able to get big defensive stops in all four of these wins; that has been the backbone.”

Beachem’s reverse layup put the Fighting Irish ahead 63-61 with 1:04 to go. After Ja’Quan Newton made one of two free throws for Miami, Vasturia drove for a layup with 8 seconds remaining.

Following a timeout, Beachem made a steal on the inbounds play, and Matt Farrell’s two free throws iced the victory.

Miami coach Jim Larranaga declined to blame his young team’s inexperience on the fade at the finish.

“It’s more of a factor of how cool, calm and collected Notre Dame is at the end of these games,” Larranaga said.

“We’re really mentally tough,” Brey said. “We’re not affected when a guy rejects one off the backboard and the crowd goes crazy. We bounce back and keep playing.”

Miami senior Davon Reed tied a career high with 21 points but made a critical late turnover.

“We just didn’t take care of the ball late in the game,” Reed said. “We didn’t have poise down the stretch.”

The Hurricanes had 13 turnovers to only six for Notre Dame.

The Fighting Irish outscored opponents 25-6 in the final 6:42 of their first three league games. Their other conference wins were by one, seven and five points.

“That’s four games in a row where we’ve made plays in game situations,” Brey said. “We believe that in those situations we’re going to figure it out. It certainly is a little bit of a psychological advantage for us now.”

Bonzie Colson went 2 for 12 against the Hurricanes and was held to a season-low eight points, less than half his average.

“Their length and athletic ability really bothered him,” Brey said. “It is the first time someone has totally taken him away.”

The Irish led only briefly in the first half but outscored Miami 10-0 to begin the second half and take a 38-28 lead. Colson started the run with a 3-pointer, and Martinas Geben finished it with a dunk.

Notre Dame had its biggest lead at 50-39 before the Hurricanes went on a 13-2 run to forge a tie and set the stage for the frantic finish.

Notre Dame will remain on the road to play at Virginia Tech on Saturday. That’s the second of three consecutive away games for the Irish.

Miami plays at Pittsburgh on Saturday, and its next three games are on the road.

“No time to mope around,” Reed said.

“Well we talk all the time about how important it is to do the little things well. I thought the first half was a very well-played, hard fought first half. Ends up 28-28. I thought the second half they got off to a terrific start and then we made our comeback and took the lead. I don’t have the time table but it was 61-61 with about a minute or a minute and a half to go. And the game came down too little things. We turned the ball over at critical times. I don’t understand, we are a good free-throw shooting team but we went 8-of-14 from the foul line and they went 12-of-14. So we shot the same number of free throws that they did but they outscored us by four. If you had told me that we were going to make one more 3-pointer, then them – we make six they make five – I would say we win. If you told me we were going to out rebound them 47 to 38, I would say we were going to win that game. But when we have 13 turnovers and they have six, that really is the difference in the game. The free throws and the turnovers. I thought both teams played very, very hard and a lot of it was very good basketball.”

On being disappointed with the loss…

“I am always disappointed when we lose. But I am not disappointed in how hard we played. I am not disappointed in how we responded when we fell behind. When you fall behind, like when we played Syracuse we battled back and pulled within one. In this case we came back and took the lead by four or five. With just two and half minutes to go. But we just didn’t finish. Now some of the credit goes to an experienced team like Notre Dame that switched to the zone. They have done that now a couple of times. Against Pittsburgh they played zone on the last possession. Against Clemson they did the same thing and then today. We just needed to be better in finding the open man. Davon Reed was getting ready to pass the ball to Ja’Quan Newton right at the foul line, which I think if he got it to him we probably would have scored. But the ball slipped out of his hands. And when the ball slips out of your hand, nothing you can do about that. It happens.”

“Well this was a fabulous win for us, Miami made a great run and we had to make some plays to escape. That’s four games in a row that we’ve made plays in close game situations and had good defensive plays made to win a game. We kind of believe in those situations that we’re going to figure it out and it certainly is a bit of a psychological advantage for us now.”

On how they felt early in the second half…

“I felt really good, we were moving and then they started really driving us, they’re very physical drivers and we had a hard time keeping them in front of us and got to the offensive board, which they’re going to do, they’re really athletic and that hurt us. I never thought we were going to win by 18 on the road in the ACC. I felt they would have a run in them and they certainly did. Very similar to the three previous games we answered a run and we played so well on both ends of the floor the last three or four minutes.”

On if playing the zone helped….

“It helped us. They were coming down our lane and that did help us. We felt that we would give up some three-point shots, which we did, I don’t know how many they made, 6-of-18. What we had were deflections, we got some hands in the way, they turned it over a bit and their rhythm was different, they couldn’t just drive down the pipe. We’ve played zone in every game in the ACC at some point and it’s really helped us.”

As a team, the Hurricanes swatted 12 Notre Dame shot attempts, the most ever in an ACC game for the Canes, and the most this season by UM. The previous ACC high was nine twice, the last time against Wake Forest in 2009, and this season’s high was eight, twice, with the last occurrence against Rutgers on Nov. 30.

With nine rebounds, freshman guard Bruce Brown has grabbed at least four rebounds in each of the first 15 games, has eight-or-more in seven outings.

Sophomore Ebuka Izundu swatted three Fighting Irish shots, tying his career high of three, which he has done twice in his career. He has a block in seven of the last nine outings.

Guard Anthony Lawrence pulled down nine rebounds, setting a new career high for the sophomore. His previous best was seven (twice), with the last occurrence against SC State this season.

With 14 points against Notre Dame, junior point guard Ja’Quan Newton has scored 11-plus points in every game.

Senior forward Kamari Murphy grabbed 12 rebounds, his sixth game this season with double-digit boards. His previous ACC high was 11 rebounds against Virginia in 2016.

Senior guard Davon Reed tallied 21 points and six rebounds against Notre Dame. He has scored in double digits 12 times this season, including 10 of the last 11 games. He has grabbed five-plus rebounds in seven outings. Reed has hit at least one shot from long range in every game, with multiple threes in 11 contests. He has multiple threes in seven straight games.

Senior guard Davon Reed has knocked down 21 shots from long range in the past seven games. For the year, he has hit multiple 3-pointers in 11 outings.