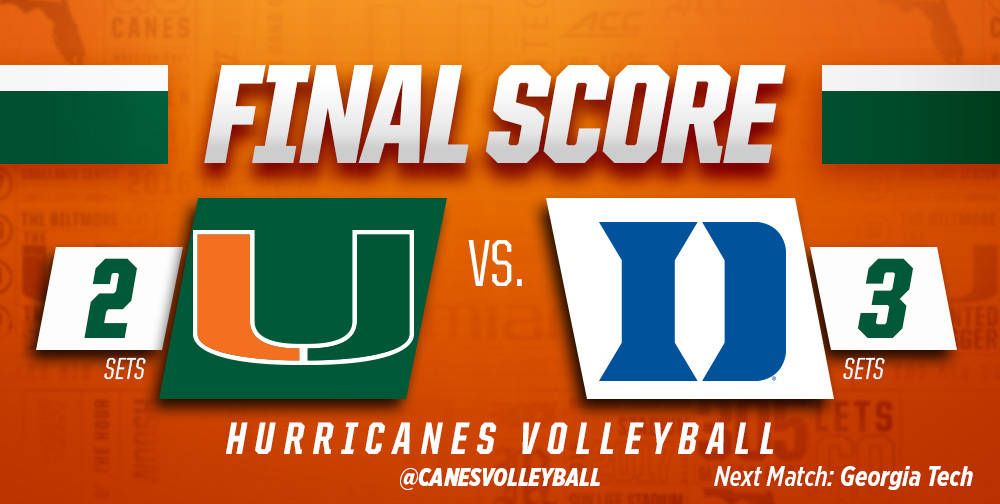 DURHAM, N.C. – The University of Miami volleyball team dropped its final road contest of the 2016 season, falling at Duke in five sets.

Duke took the opening set, 25-13, but Miami had a 25-18 victory in the second set to head into the intermission tied at one set apiece.

The Blue Devils would force a decisive fifth set with a 25-21 victory in the fourth and closed out the match with a 15-10 win in the final set.

Olga Strantzali finished one kill shy of her career high, recording 29 kills and adding 10 digs, three blocks and a service ace. The junior recorded her team-best 12th double-double of the season.

Anna Haak had a career-best 22 kills with a .327 hitting percentage, recording 11 digs and a block to notch her eighth double-double of the year. Kolby Bird had five kills on a .385 attack percentage and added five digs, a block and a team-best two service aces.

Madison Dill and Lucia Pampana manned the middle for the Hurricanes. Dill finished with seven kills on a .400 hitting percentage and added a team-leading four blocks. Pampana closed the afternoon with six kills and a block.

Hannah Sorensen dished out 60 assists and added eight digs and a block. Sylvia Hernandez led all Hurricanes with 16 digs and added five assists, while Sara Duque had 10 digs and an assist.

Following this weekend’s action, the Hurricanes return home for the final two matches of the regular season. Miami will host Georgia Tech at 7 p.m., on Nov. 23 and welcomes Clemson for the season finale at noon on Nov. 25.