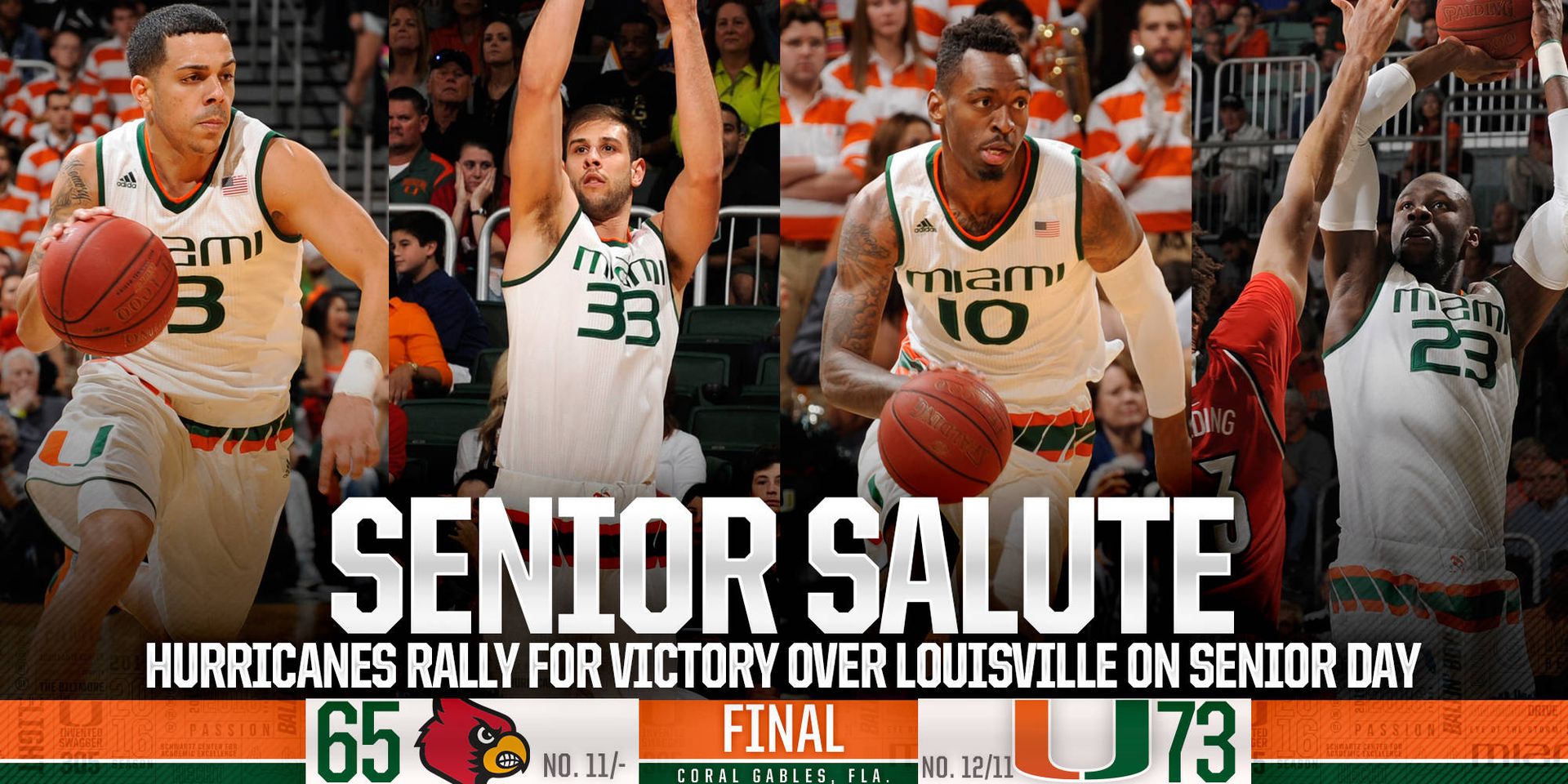 CORAL GABLES, Fla. (AP) — No. 12 Miami applied smothering defense led by center Tonye Jekiri to hold No. 11 Louisville without a point for nearly 5 minutes down the stretch Saturday to win 73-65.

Jekiri, playing with four fouls, made both ends of a 1-and-1 to put the Hurricanes ahead to stay, 63-62.

Angel Rodriguez had 17 points and seven assists for the Hurricanes (23-5, 12-4 Atlantic Coast Conference), who completed a sweep of their nine league home games. The Cardinals (22-7, 11-5) fell behind Miami into third place in the league race with two games left.

Quentin Snider had 14 points for Louisville. Sophomore Chinanu Onuaku, who fouled out late in the game, tied a career high with six assists and had 10 points and eight rebounds.

Leading scorer Damion Lee went 3 for 12 from the field, including 0 for 5 from 3-point range. He scored six points, more than 10 below his average.

The Cardinals were shooting 56 percent for the game before their late drought. Jekiri, who had been on the bench for 6 minutes because of his foul trouble, re-entered with 4:50 left and Miami trailing 62-61. His presence down the stretch made a big difference.

So did a roaring capacity crowd. The Hurricanes finished the season 15-1 at home, with the only loss to Northeastern in November.

It was the final home game for seniors Jekiri, McClellan, Rodriguez and Ivan Cruz Uceda.

The Hurricanes shot 59 percent in the first half but trailed 38-36 at halftime because Louisville shot 58 percent. The Cardinals outscored Miami 8-2 to start the second half for their biggest lead, 46-38.

The Hurricanes were without sixth man Ja’Quan Newton, who began a three-game suspension for a violation of team rules.

For Miami, the game was the third of four straight against ranked teams over a 12-day stretch.

Miami beat Louisville for the first time since 1963. The Cardinals had won five straight in the series.

Team Notes
– With the win, the Hurricanes captured their fifth win over a ranked team this season. Miami is 5-2 this season against ranked opponents.
– The Hurricanes finished ACC play with a perfect 9-0 record at home.
– Miami has won seven of its last eight games.
– The Hurricanes have a 13-game home winning streak which is tied for the second longest in school history.
– Miami improved to 3-9 in the all-time series against Louisville, which dates back to the 1950-51 season. The Canes are now 3-5 at home against the Cardinals.
– Miami improved to 15-1 in home games this season.
– The Hurricanes’ win over Louisville snapped Miami’s five-game losing streak to the Cardinals.
-Miami trailed 38-36 at the half. The Hurricanes have trailed just nine times at the half this season. Miami is now 5-4 when trailing at the half.
– Louisville suffered just its third loss when leading at the half.
– The Hurricanes committed just seven turnovers on the afternoon. Miami has limited itself to 10-or-fewer turnovers for the 13th time this season.
– With the win, Coach Jim Larrañaga now has a 584-388 overall record in his 32nd season as a head coach. He is 114-54 in his fifth season at the University of Miami, with a 53-33 mark in ACC play.
– Miami held Louisville to 12 points below its season average. The Cardinals entered today’s game averaging 77 points per game.
– Miami held a 27-25 rebounding advantage over Louisville.
– The Hurricanes also held Louisville’s leading scorer Damion Lee to just six points, which tied a season low. Lee entered the game averaging 16.6 points per game.
– Lee has only failed to score in double digits three times this season.
– Prior to the game, Miami honored seniors Sheldon McClellan, Angel Rodriguez, Tonye Jekiri and Ivan Cruz Uceda.

Individual Notes
– Redshirt senior guard Angel Rodriguez scored 17 points. Rodriguez’s 17 points tied a season-high in ACC play this season. It also was just two points shy of his season high of 19 points.
– Junior guard Davon Reed scored 17 points.
– Reed finished in double figures for the 16th time this season.
– Senior center Tonye Jekiri tied a season-high with two steals.
– With 13 points against the Cardinals, senior guard Sheldon McClellan had double-digit points for the 16th straight game and for the 25th time this season. The last contest McClellan did not reach double figures was Dec. 29th against Princeton.
– McClellan finished the game with 13 points.

“To begin with, this was a very big day for us. It was Senior Day, and we have four great seniors: Angel Rodriguez, Sheldon McClellan, Ivan Cruz-Uceda and Tonye Jekiri. The one thing we didn’t want was them to end their senior years on a loss. The game was very much in doubt, midway through the second half we fell behind. At a timeout I stopped Angel as he came off the court and said to him listen, you need to show everybody in this arena how hard you are willing to play, to win this game; how important this game is to you, and your teammates will follow. I want you to pick up their point guard full court and play with great defensive intensity, and you’ll see what happens. From that moment on he was absolutely sensational – the best player on the court on both ends of the court – scoring, dishing, rebounding. He had a fantastic rebound, his on-ball pressure created in his teammates, a vision of how we expected them to play and we were able to come back and win a great game against a very highly regarded team. We’re very very proud not only of our seniors, but of the entire team and how well we’ve played at home the season. We’re very appreciative of our students who camped out last night and then our fans who have supported our team this year. That was our last home game of the season and now we’ve got to go on the road for two more regular season games and then the ACC Tournament and hopefully beyond.”

On Angel Rodriguez and his evolution from last year to this year
“Well the year that he sat out, Angel was fantastic in practice. Last year he was fantastic some of the time, but his performances were somewhat inconsistent and maybe he was affected because sometimes he didn’t shoot the ball particularly well. That bothered him mentally, but this year he went through a tough period as well and fought through it. He just kept plugging away and quit worrying about scoring, and he started concentrating on his defense and his ball handling and then pretty soon he started making all his shots. That’s the funny thing about shooting you know, you worry about it if you miss. You remember your missed shot more than you remember your makes, it’s a problem and he overcame that in January, and he has started every game in his two-year career here that he’s been healthy, but he plays so hard. He’s been banged up, he missed seven or eight games last year due to injury, but today’s performance, I would say goes down in Miami Basketball history as one of the best second half performances by any guard I have coached.

On Miami’s plan defensively down the stretch
“Just play harder. We were playing with great energy and determination. We kept telling them at time outs, listen we’re playing okay, we’re playing the right plays but we’re not stopping them. We’ve got to stop them, we’ve got to make them miss, and we’ve got to get the rebound. In that last ten minutes I think we had six-consecutive stops at one point late in the game.”

On losing Ja’Quan Newton for three games
“You know he’s been suspended, we’re going to miss him. He’s a great kid, who made a mistake and now he’s paying the price. We’re very fortunate that the team didn’t have to pay the price today, but he’ll be back with us for the ACC Tournament and he’ll learn from this lesson.”

Opening Statement
What I’ll tell you guys is what I told the team, it’s the same thing, so you don’t have to ask them. I told them that both teams played really good basketball, fun basketball, great passing, but they were the better team in the second half and you have to give them all the credit. We struggled with defending, the pick and roll, we went inside in the first half and put on an offensive clinic with not over passing getting six assists. We didn’t go to him (Chinanu Onuaku) as much in the second half, he got a little tired, he got hurt there a little bit, but that was a big key for us going inside and cutting off of him. They were the better team and too often, people can’t give credit to the other team because we played well, they were just better the second.”

On Miami’s toughness
I think it’s experience. It’s a combination of both, it’s building something, you know like when you go to a Final Four, after your tournament, you’ve got to be tough enough to win four games to get there and it’s got to be consistency. Miami has all the tools because they shoot free throws well, they’re long, they’re physical, and they have experience. They have a good back court. You know, Angel’s tough in pick and rolls at the end of a game which you can isolate, and he’s a much different basketball player this year than he was last year. Last year he was out of control, he was erratic and he was heavy. This year he’s light, speedy, he’s smart, doing all the smart things, so you’ve got to give credit to a player who turns around his body, turns around his game like that. So they have all the little things, they’re very well coached, very well drilled, and they can be one of many teams that can win four games and get to a final four.

On Louisville’s offense down the stretch
To be honest with you there, we missed four wide open shots. We had Damion (Lee) on the baseline with a 16 footer, and in and out for a three with Trey, we had Trey going to the basket twice, getting fouled, and not getting the call for a lay-up, we had Q (Quentin Snider) wide open, didn’t make the shot. Sometimes, you just miss, and you look for reasons to blame and there are none, the other team was better.

On Mahmoud
“You’d have to ask him that. It doesn’t bother me when we have Anas (Mahmoud), he played a great game against Miami last year, if we have Anas and Mango, I could care less about foul trouble. I think we’d be a pretty difficult team to beat if we had Mango and Anas, but we don’t, and injury’s a part of the game, but next year it won’t be a problem, we’ll have many many substitutes in the front court.

On the mindset of the team
I told them, when we lost to Notre Dame – this is the most overachieving team I’ve ever coached in my life outside of Providence in ’87. Because, mentally they’ve just been let down like a balloon burst, and you would think right now, we’re playing for a one seed how hard we’re playing. We beat Pitt on the road, with two walk-ons in the game, and we go on a 7-0 run, we play a great first half here. We’re playing so hard. This the team, I will probably always appreciate the most, now we’re not getting any banners, we won’t have any Final Fours but personally of coaching 41 years, I think I’ll look back and appreciate this team so much. Now they won’t get down, we have got two more games and the club will play just like they played tonight. They may get beat, but they’ll play just like they did tonight.