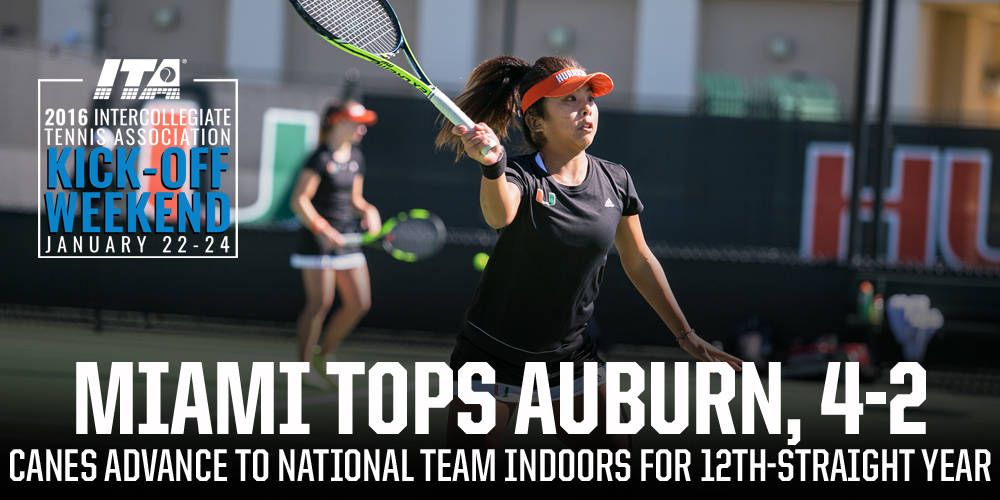 CORAL GABLES, Fla. – The University of Miami women’s tennis team posted a 4-2 comeback victory over No. 41 Auburn Sunday at the Neil Schiff Tennis Center to conclude play in the ITA Kick-Off Weekend.

After dropping the doubles point, No. 12 Miami (2-0) won the first three singles matches to take control of the match. The win sends the Hurricanes to the ITA National Team Indoor Championship for the 12th-straight year and 16th time overall.

“We had a good little test, losing the doubles point and then having to flip the momentum against a very competitive Auburn team,” Miami head coach Paige Yaroshuk-Tews said. “Our team competed very well, although we need to clean a few things up as we inch closer to National Indoors.”

The teams split the first two doubles matches, with Alizee Michaud and Reka Muller of Auburn (2-1) first topping freshman Ana Madcur and sophomore Sinead Lohan, 6-0. The Hurricanes then pulled even when senior Stephanie Wagner and sophomore Wendy Zhang earned a 6-1 victory over No. 30 Pleun Burgmans and Paula de Man.

The doubles point came down to a tiebreaker between sophomore Silvia Fuentes and senior Clementina Riobueno of Miami and Auburn’s Andie Dikosavljevic and Alannah Griffin. The Tiger duo came through with the narrow 7-6 (7-5) victory.

Madcur, Fuentes and Zhang got the Hurricanes off to a quick start in singles action. Madcur earned her first-career singles dual match victory to even the score at one, downing de Man, 6-1, 6-1.

Auburn closed to within a point when Michaud topped Riobueno, 6-3, 7-6 (7-5), but Lohan then slammed the door. After dropping her opening set, the nation’s seventh-ranked player stormed back for a 4-6, 6-3, 6-1 win over No. 31 Dikosavljevic.

Sunday’s match was originally set to be played Saturday, but was pushed back a day when Friday’s matches were postponed due to rain and delayed until Saturday.

The Hurricanes return to action Friday at 3 p.m. when they host No. 23 Georgia Tech at the Neil Schiff Tennis Center to open ACC play. After that it is off to the aforementioned ITA National Team Indoor Championship in Madison, Wis., Feb. 5-8.