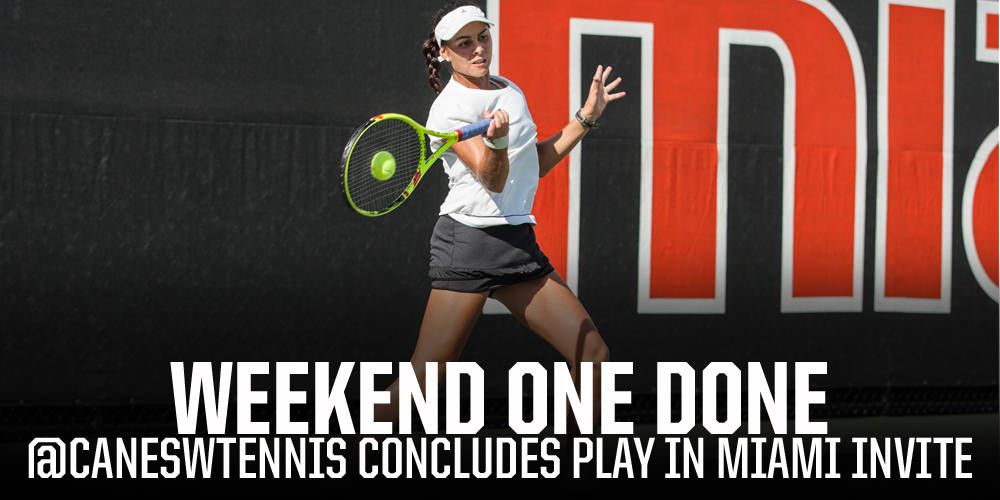 CORAL GABLES, Fla – After another weather delay, the University of Miami women’s tennis team put forth a strong performance on the last day of the Miami Spring Invite.

The Hurricanes faced doubles pairs from No. 25 Ole Miss, No. 41 Texas and the defending national champion, top-ranked Vanderbilt. Due to the delay, the teams played two rounds of doubles and no complete singles matches.

Lohan and Madcur dominated Lana Groenvynck and Neda Koprcina from Texas, 6-1, in the first round of doubles matches. The second round result was almost identical for the Hurricanes, as Lohan and Madcur defeated Allie Sanford and Natalie Suk of Ole Miss, 6-2.

Senior Stephanie Wagner and sophomore Wendy Zhang went 1-1 on the day. The pair dropped a close match to No. 28 Breaunna Addison and Danielle Wagland of Texas, 7-5. They then found success against No. 47 Mai El Kamash and Arianne Hartono of Ole Miss 7-6 (7-5).

Tanielian and Riobueno also won a doubles match against a split pair of Fuentes and Texas’ Chelsea Crovetti, 6-3. In addition to the doubles matches, Tanielian played a one-set singles contest against Texas’ Crovetti, 6-1

Matches continue for the Hurricanes on Jan. 22 against Middle Tennessee in the ITA Kick-Off Weekend.

To stay updated on the University of Miami women’s tennis team this season, follow @CanesWTennis