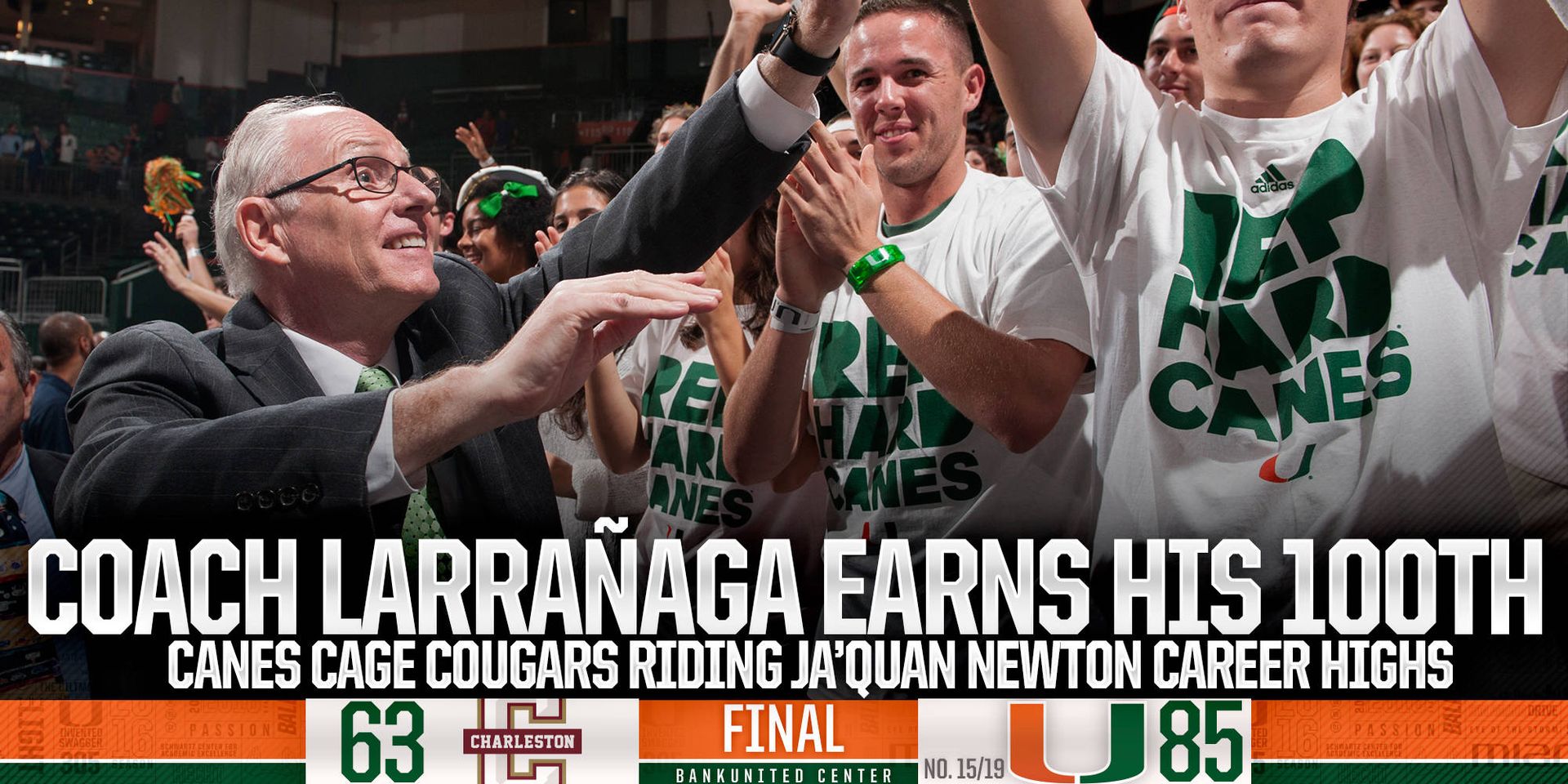 Ja’Quan Newton scored a career-high 20 points off the bench, Sheldon McClellan added 14 and No. 15 Miami showed no signs of rust from its 11-day break for exams in beating College of Charleston 85-63 on Saturday.

Anthony Lawrence scored 11 and Tonye Jekiri added 10 for the Hurricanes (9-1), who led 43-40 early in the second half before blowing the game open. It was also the 100th win at Miami for coach Jim Larranaga, coming in his 150th game with the Hurricanes.

Canyon Barry, the son of former Miami great and Basketball Hall of Famer Rick Barry, scored 20 points for Charleston (7-3) and did so with his dad watching from the stands. Jerrell Brantley scored 13 points and grabbed 11 rebounds and Marquise Pointer scored 11 for the Cougars, who had their five-game winning streak snapped.

Miami came into the game among the nation’s leaders in field-goal and 3-point percentage, and got right back into rhythm even after the long layoff. The Hurricanes shot 56 percent, topping the 50-percent mark for the seventh time in 10 games this season.

And when the Hurricanes started rolling, the outcome wasn’t in doubt.

Canyon Barry made a jumper 5 minutes into the second half to get the Cougars within three. Miami answered with 10-0 run that pushed the lead back into double-digits, and it stayed there the rest of the way.

Canyon Barry was scoreless in 35 minutes against Miami last year. He made 8 of 20 shots on Saturday.

-The Canes’ victory over Charleston marks win 100 for Head Coach Jim Larrañaga as a University of Miami Hurricane. Needing only 150 games, Coach Larrañaga is the fastest to accomplish the feat in program history. Bruce Hale was the Miami coach who won 100 games the quickest, earning 100 victories in just 159 games. Hart Morris took 163 games, Frank Haith 174 and Leonard Hamilton took 230 games.

-Sheldon McClellan has scored 10-or-more points in eight games this season, including 14 against Charleston. He has a steal in every game but one (vs. Charlotte).

-With three blocks against Charleston, Kamari Murphy has at least one block in five-straight games.

-Newton has now scored double-digit points in eight games after only scoring 10+ in four games as a rookie. His previous career-best was 17 vs. No. 22/20 Butler in Nov. 22.

-Newton’s seven rebounds against Charleston are a career high, topping his previous best of five, which he grabbed twice, most recently against Stanford in the NIT.

-Newton also tallied a career-best four steals, besting his previous high of two against No. 22/20 Butler.

-Ivan Cruz Uceda hit one shot from long distance and has now knocked down at least one 3-pointer in every game except two, at Nebraska and vs. Florida.

-Angel Rodriguez has knocked down a 3-pointer in every game, including one against Charleston.