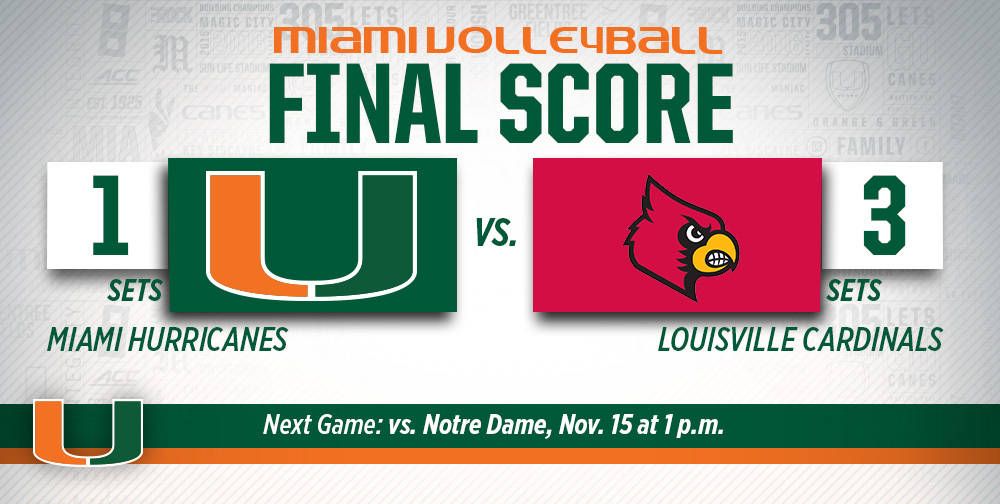 CORAL GABLES, Fla. – The University of Miami volleyball team dropped a tight match against No. 22 Louisville on Friday, falling to the Cardinals in four sets.

The Hurricanes (17-8, 10-5 ACC) and Cardinals battled in a tight opening set, but Louisville prevailed 25-20. Miami got solid production in the opening set from junior Kelsie Groot, whom led the Canes with four kills and a .500 attack percentage.

“I liked the way we competed,” Miami head coach Jose “Keno” Gandara said. “We played a good, ranked team and they’re number one in our conference. At times, we played the way we wanted to play. I think the pressure of doing that throughout the match was a challenge and that’s what good teams will do.”

The second set produced another back and forth effort from both squads, but Louisville pulled away late to win 25-22. Groot led the Canes with five kills and a .333 attack percentage, while Taylor Scott added four kills, but the Cardinals went into the intermission up two sets to none.

“I think we took what we did this week in practice and tried to take it out there with us,” Groot said. “It came down to a few plays in each set, but we worked really hard and showed what we are capable of doing.”

Groot and Scott stepped up again for the Canes in the third set, each tallying a team-high five kills in Miami’s 25-23 victory. Miami’s hit .270 as a team for the set, their best percentage over the opening three sets against Louisville.

“I think we showed that we’re not a team to look down on,” Groot said. “We are ready to fight in every game we play.”

The tight battle continued in the fourth set, but Miami fell short 25-23, dropping the set and the match. Freshman Anna Haak provided a spark off the bench with five kills in the set, but the Hurricanes could not push past the Cardinals. Miami dropped a match on their home floor for the first time this season, moving to 10-1 at the James L. Knight Sports Complex in 2015. Prior to Friday night, the Hurricanes had won 17 consecutive home matches, last falling in five sets to No. 5 Florida State on Oct. 5, 2014.

“We love playing at home and go in wanting to protect our home court,” Groot said. “It hurts to lose, but this just makes us want to come back out on Sunday ready to get back to defending our gym.”

Groot powered Miami’s attack, posting a team-high 18 kills to go with an outstanding .368 hitting percentage. The junior added a team-best 14 digs and three blocks to finish up her team-best ninth double-double of the season.

“We needed it tonight,” Gandara said of Groot’s big game. “She has been consistent. Sometimes the matchups are tougher on her, but she was in good rhythm tonight and we took advantage of that. They did a good job preparing for Taylor. Any given night, it’s going to be like that. We need it to come from multiple players.”

Scott also finished with double-digit kills for Miami, tallying 12 on the night, while adding 11 digs and three blocks to record her seventh double-double of the year.

Haley Templeton dished out 45 assists and tied with Groot for the team lead with 14 digs. The sophomore added a pair of blocks in what was her seventh double-double of the year. Kalysta White recorded 11 digs and five assists as Miami’s starting libero.

The Canes also saw Haak, fellow freshman Kolby Bird, and sophomores Sylvia Hernandez and Michele Marenus step up off the bench against Louisville. Bird recorded one kill on three attempts, while Hernandez tallied six digs and two assists. Haak finished with five kills and a solo block, while hitting .444 in her one set of action.

“I think it needs to be one of our strengths that we are deep,” Gandara said. “It’s not necessarily what you are looking for as a coach, but everybody is ready and will have a role for that match and that role is earned during the week. Anna is doing better and better in her serve receive and we needed a little offense there and she did a nice job.”

The Hurricanes will host Notre Dame at 1 p.m. on Sunday to close out the weekend. Following this weekend’s action, Duke and Wake Forest will travel to Miami for the final two home matches of the 2015 Hurricanes volleyball season.

The Canes will host Duke at 7 p.m. on Nov. 20, with a pre-match ceremony honoring seniors Caitilin Donahoe, Alexis Mourning, Taylor Scott and Kalysta White. The Hurricanes will host Wake Forest at 1 p.m. on Nov. 22 in the final home match of the season. All Miami home matches are played at the James L. Knight Sports Complex on the University of Miami campus and admission is free.