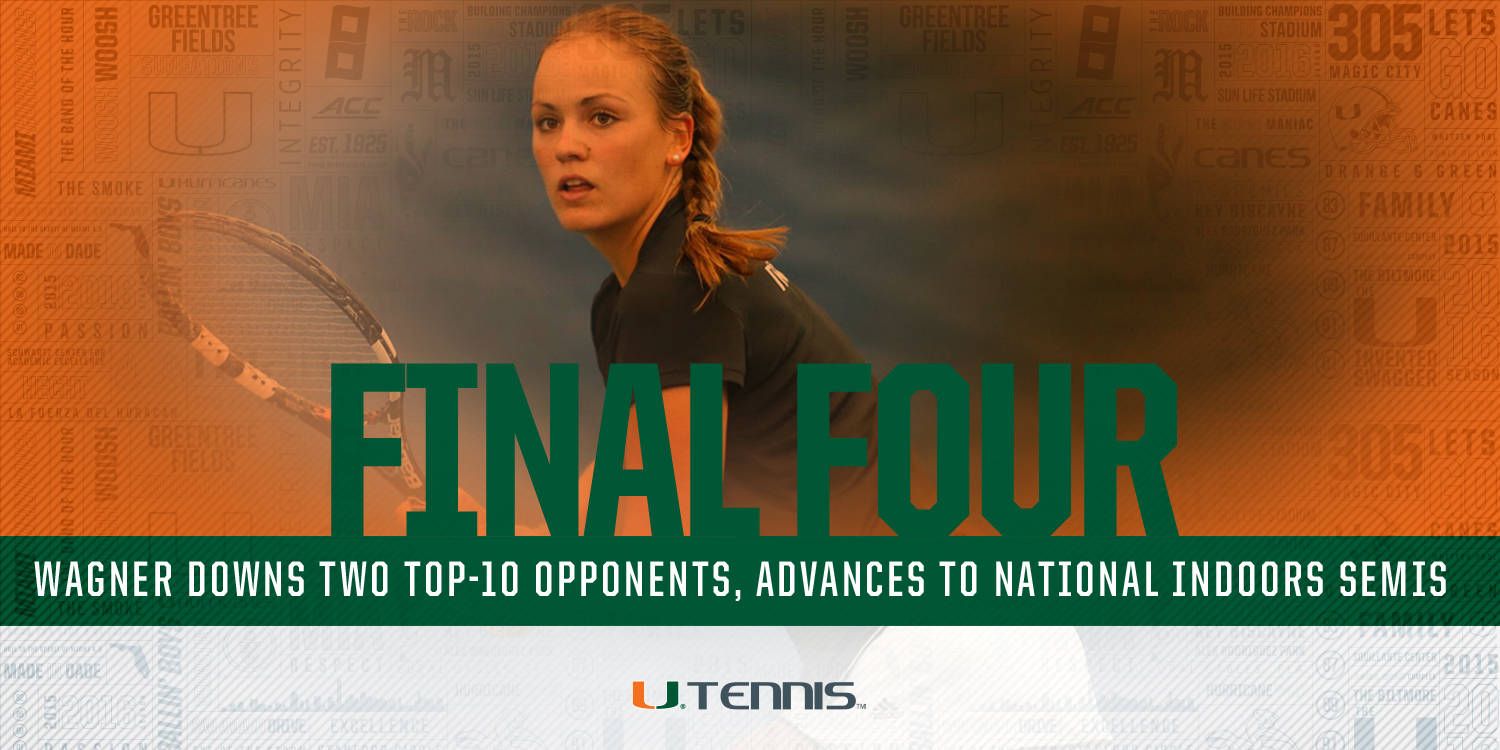 FLUSHING, N.Y. – Entering Friday, Stephanie Wagner of the University of Miami women’s tennis team had four-career wins over top-10 opponents. Now, she has six and is headed to the semifinals of the most prestigious indoor tournament in the country for the second year in a row.

The senior took down second-ranked Brooke Austin of Florida and seventh-ranked Sydney Campbell of Vanderbilt to earn a spot in the USTA/ITA National Indoor Intercollegiate Championships (NIIC) final four.

“It’s exciting to see your senior come through in situations that she wasn’t able to conquer before,” Miami associate head coach Laura Vallverdu said. “Steffi has improved her mental side of the game, which makes her really dangerous for the remainder of this tournament. I’m expecting great things tomorrow and a ton of hard work.”

After dropping the first set against Austin, 3-6, Wagner came out strong in the second and grabbed a 5-3 edge. Austin battled back to pull even at five, but Wagner, ranked sixth and seeded eighth, stayed strong and won back-to-back games to close out the set at the USTA Billie Jean King National Tennis Center.

In the decisive third set, the players split the first two games and then Wagner won three of the next four to go up 4-2. From then on they traded games until Wagner clinched the 3-6, 7-5, 6-4 victory. The win over Austin was the third top-three victory of Wagner’s career and her 111th overall, moving her past Audrey Bañada and into sole possession of third place in program history.

Following her defeat of Austin, Wagner turned her attention to Campbell of reigning NCAA champion Vanderbilt. The Amberg, Germany native picked up the victory in straight sets, 6-3, 6-4, to reach the semifinals.

Last year, Wagner also beat two top-10 opponents on day two of the NIIC to get to the final four. Four of her six-career top-10 wins have come in the NIIC.

Sophomore Sinead Lohan also had an NIIC singles main draw match Friday. The nation’s No. 13 player and the fifth seed in the tournament, Lohan took on No. 11 Joana Eidukonyte of Clemson.

Wagner will resume play Saturday at a time to be determined with her semifinal match against Ohio State’s Francesca Di Lorenzo. Although ineligible to be nationally ranked this fall due to being a freshman, Di Lorenzo is atop the ITA’s newcomer/freshman rankings. The match will be broadcast live on ESPN3.

Additional information on the NIIC can be found on the tournament homepage HERE and live scoring is available HERE.