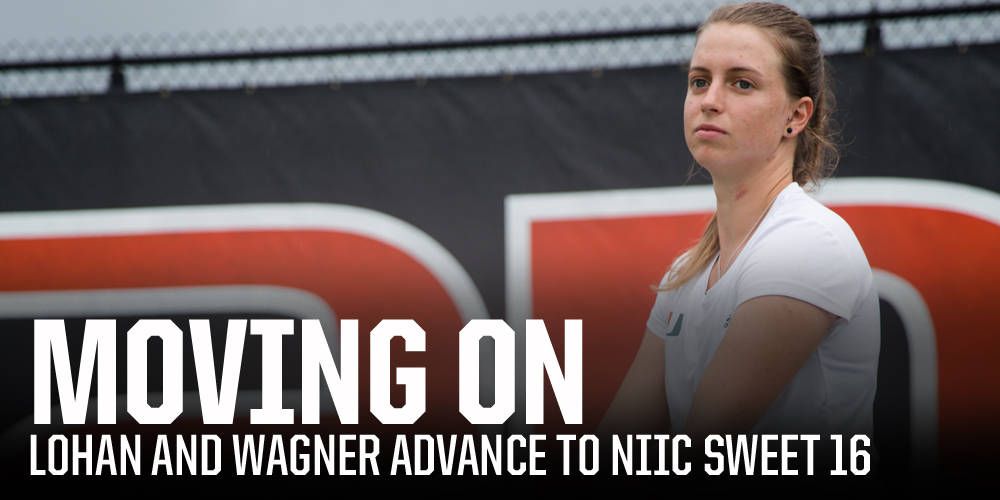 Wagner, Lohan Earn Wins on Day One of NIIC

“Both Steffi and Sinead came out working and both were able to get the W today,” Miami associate head coach Laura Vallverdu said. “Minor changes need to be made for them to continue on a great path for the tournament. I’m hoping for a great day tomorrow.”

Lohan, ranked No. 13 and seeded fifth in the singles main draw, split the first two games of the opening set with Rychagova and then took over from there, winning five of the final six to go up a set.

The sophomore from Waterford, Ireland, fell behind 3-4 in the second set, but closed strong by winning three-consecutive games to clinch the victory.

Sixth-ranked and eighth-seeded Wagner dominated the first set against Dikosavljevic without so much as dropping a game, as the senior came out strong from the get-go.

The second set was tighter, with Dikosavljevic fighting off a 40-all match point to pull within a game, 5-4. However, Wagner stayed tough and broke to win the match and move to 4-1 in NIIC singles play in her career.

The Hurricanes will resume play Friday in the singles main draw round of 16 at a time to be determined. Lohan is set to face No. 11 Joana Eidukonyte of Clemson and Wagner will meet Florida’s Brooke Austin, who is ranked second nationally.

Additional information on the NIIC can be found on the tournament homepage HERE and live scoring is available HERE.