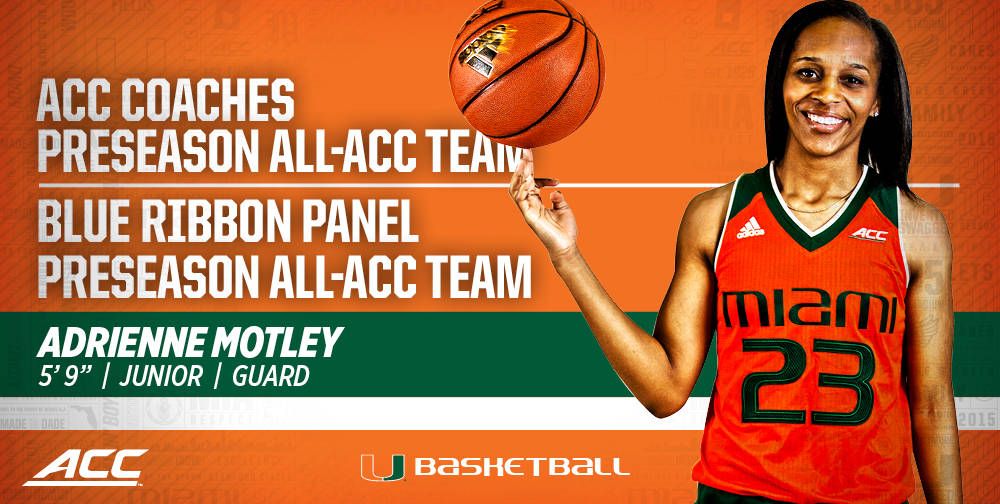 The University of Miami was selected to finish sixth by both the ACC Coaches and the Blue Ribbon Panel, while junior guard Adrienne Motley was chosen for the Preseason All-ACC Team by both groups.

The Hurricanes have eight returning letter winners from a 2014-15 team that finished 20-13 and reached the second round of the NCAA Tournament. Last year marked Miami’s sixth-straight postseason appearance and fourth NCAA trip in the last five seasons.

Miami, which finished 8-8 in the ACC last year, has the second-most ACC victories over the last five years. Notre Dame, Florida State, Duke, Louisville, and Syracuse were tabbed first place through fifth in both polls.

The Hurricanes are under the direction of Katie Meier, who has directed Miami to 183 victories in her first 10 seasons as head coach. In the last six years, the Hurricanes have posted 20-plus victories five times.

A native of Newport News, Va., Motley is one of only three returning ACC players on the 10-member 2014-15 Blue Ribbon Panel All-ACC First Team. The others are Florida State senior center Adut Bulgak and Notre Dame sophomore forward Brianna Turner, who was tabbed as the ACC Preseason Player of the Year by both voting outlets.

The full predicted order of finish and preseason all-conference honors can be found on the official ACC women’s basketball webpage HERE.

The Hurricanes begin the 2014-15 season Nov. 4, when they host Nova Southeastern in an exhibition game at the BankUnited Center at 4 p.m. The team will open the regular season against Wright State Nov. 13 at 11 a.m. at the BUC.