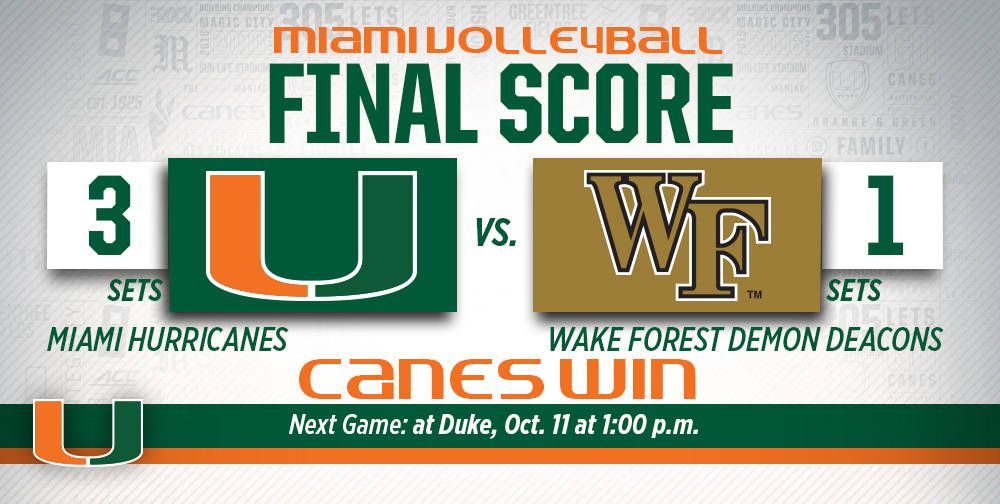 WINSTON-SALEM, N.C. – The University of Miami volleyball team opened its road trip to North Carolina with a four-set victory over Wake Forest.

The Canes (10-5, 3-2 ACC) and Demon Deacons split the first two sets with Wake Forest taking the opening set 25-20 and Miami evening the match with a 25-22 victory in the second set. The Hurricanes took the third set, 25-22, to take a two sets to one advantage in the match. Miami closed out the four-set victory with a 28-26 win in the match-clinching set.

Senior Taylor Scott led Miami’s attack with 15 kills, adding four digs and a block. Sophomore Olga Strantzali was the second Hurricane to finish with double-digit kills, tallying 12 kills and a team-high 12 digs to go with six blocks and a pair of aces.

The Hurricanes are back in action Sunday at 1 p.m. at Duke in a match that will be broadcast on ESPN3.Following this weekend’s action at Wake Forest and Duke, Miami will return to face the other two North Carolina schools in the ACC. The Canes are scheduled to face NC State at 7:30 p.m. on Oct. 16 and North Carolina at 1 p.m. on Oct. 18.

The Canes’ next home match is set for Oct. 23 at 7 p.m. against Boston College. That same weekend, Miami will host Syracuse on Oct. 25 at 1 p.m. All Miami home matches are played at the James L. Knight Sports Complex on the University of Miami campus and admission is free.