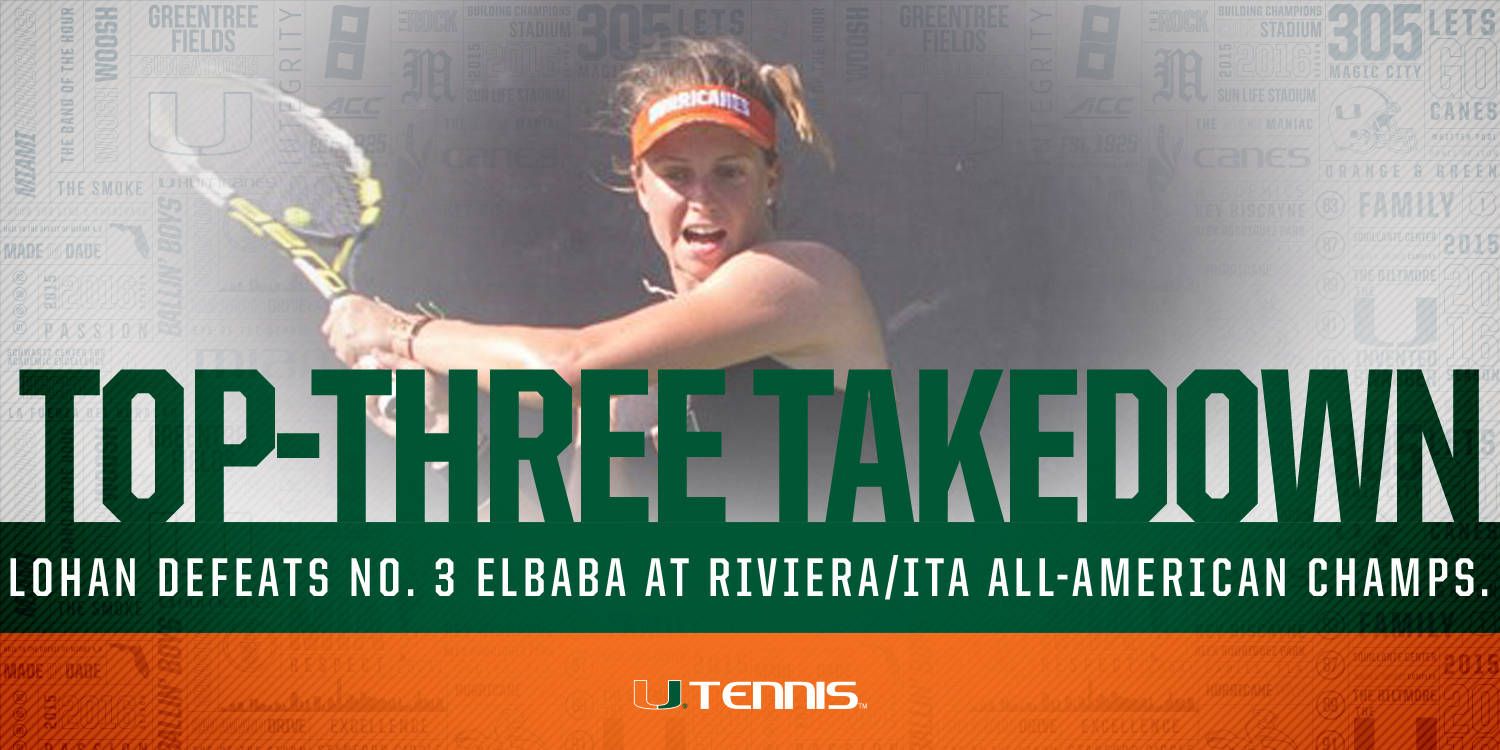 PACIFIC PALISADES, Calif. – Sophomore Sinead Lohan of the University of Miami women’s tennis team knocked off a top-five player for the second time in her career Thursday at the Riviera/ITA Women’s All-American Championships.

No. 13 Lohan took down Virginia’s Julia Elbaba, ranked third in the country and seeded second in the tournament, in three sets, 3-6, 6-4, 6-2. Additionally, sixth-ranked Stephanie Wagner earned a 6-0, 7-5 win over Luisa Stefani of Pepperdine.

“I am impressed by the level of fight and belief these two athletes bring day in and day out,” Miami associate head coach Laura Vallverdu said. “It’s humbling to watch . . . They are playing Miami-tough-type tennis.”

At third nationally, Elbaba is the highest-ranked player Lohan has defeated in her career. Lohan also downed a senior in the top five of the ITA rankings in the first round of a major tournament last year.

“Sinead did what she does best, which is find confidence in places where it’s hard to recognize sometimes, but that is what she does,” Vallverdu said of Lohan’s showing Thursday. “It’s so fun to watch her break players down.”

Meanwhile, Wagner won the first set over Stefani, who began the tournament in pre-qualifying, without dropping a game and then showed resolve in a close second set. The senior has now advanced to the second round of the tournament for the second-consecutive year.

Lohan and Wagner will resume play Friday at 2:45 p.m. ET in round two, with each facing a player ranked in the top 35. Lohan is set to take on No. 18 Rachel Pierson of Texas A&M, who Wagner defeated last month at Oracle/ITA Masters for her 100th career win, while Wagner will face No. 32 Belinda Woolcock of Florida.

Winners of the second round matches will play again Friday at 6:45 p.m. ET in the quarterfinals.

To stay updated on the University of Miami women’s tennis team, follow @HurricaneTennis.

Photo courtesy of the ITA.