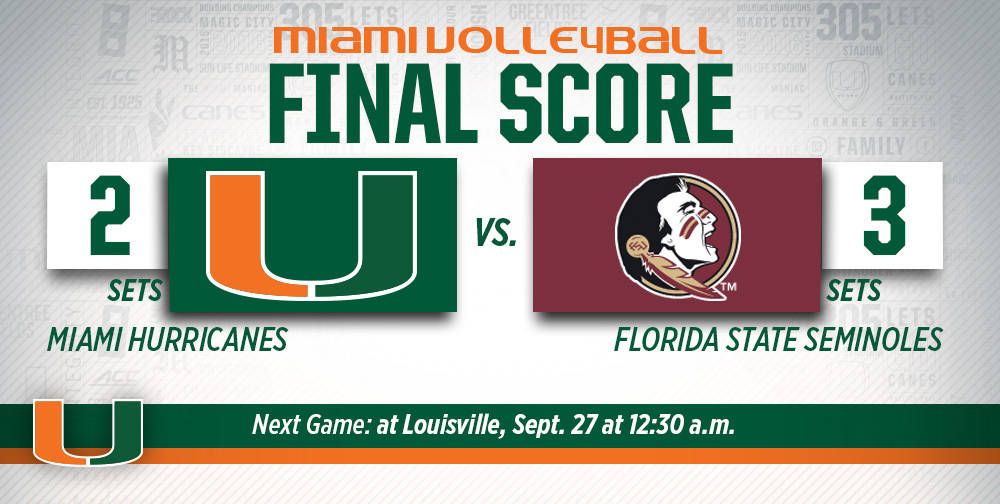 TALLAHASSEE, Fla. – Whenever Miami and Florida State meet in athletics, fans are in store for a treat and that’s exactly what they got on Wednesday night at Tully Gym.

The Hurricanes and Seminoles played a five-set thriller in a packed house of 1,300 that had both teams riding the highs and lows of a match against a rival. Despite a valiant effort by the Canes, Florida State defended its home court in a 3-2 victory over the Hurricanes.

“It was kind of two matches in one,” Miami head coach Jose “Keno” Gandara said. “The first couple of games we weren’t ourselves and I think the emotions of the match and the situation got the best of us. But I’m proud of how they responded after that.”

The Seminoles took the opening set, 25-20, in a back and forth battle. Miami saw senior Taylor Scott lead the way with five kills, hitting .375 against Florida State.

“We knew that it was mostly our mistakes and that we weren’t putting much pressure on them,” Gandara said. “Unfortunately when you get to a fifth game, it’s shorter and they played better that game. It’s our first game in a tough conference and I expect to be in this situation again.”

The Noles looked to be in control in the third set, taking a 16-9 lead, but Miami was resilient and tied the set at 18. The Hurricanes kept their hot streak going, taking the final seven points of the set to win the third set, 25-19.

“This is why we play volleyball,” Scott said. “It was a tough loss, but I am really proud that we bounced back and didn’t just lose in three sets. We’re a great team and if we believe in that then anything is possible.”

The Hurricanes dominated early in the fourth set, building a 23-14 lead. But Florida State did not fold easily, battling back within five, 23-18, before Miami closed the set 25-20 to force a decisive fifth set.

Miami and Florida State battled back and forth in a tight fifth set. The teams tied seven times throughout the decisive set, but the Hurricanes came up short as the Seminoles clinched the match with a 15-11 fifth set victory.

“This is the first game of ACC play and every match is going to be tough,” Scott said. “It’s good to know that we are capable of bouncing back when we are up against a wall.”

“It’s always a battle when we play against them and we kind of lost it at the end,” Mourning said. “This one hurts, but it gives us a sense of where we are as a team. We know we can compete with a team like Florida State that’s in the Top 25.”

Scott and Strantzali both finished with double-doubles against the Seminoles. The senior Scott closed the night with 20 kills, 10 digs, a block and two aces while hitting .300 for the match. Strantzali recorded 17 kills, a team-high 12 digs, a block and an ace in the five-set match.

“It’s disappointing to lose when you try your hardest and give your all and it’s not enough,” Scott said. “Hopefully we maintain and elevate our level of play and build from this.”

Groot’s 13 kills extended her streak of matches with double-digit kills to nine. The junior added seven digs and a team-high five blocks.

Mourning and fellow middle blocker Lucia Pampana each finished with four blocks a piece. Mourning also added 11 kills, while hitting .368 with an ace.

Hurricanes setter Haley Templeton dished out 54 assists, one shy of her career-high, and added nine digs and a block. Kalysta White recorded three assists and 11 digs as Miami’s libero.

“We definitely showed fight at the end,” Mourning said. “If we play like that throughout the rest of our games, we’re going to be very successful. It was exciting to see the team rally like that.”

The Hurricanes will close out the opening weekend of conference play at Louisville on Sunday, Sept. 27 in a match that will be broadcasted on ESPN3 beginning at 12:30 p.m.