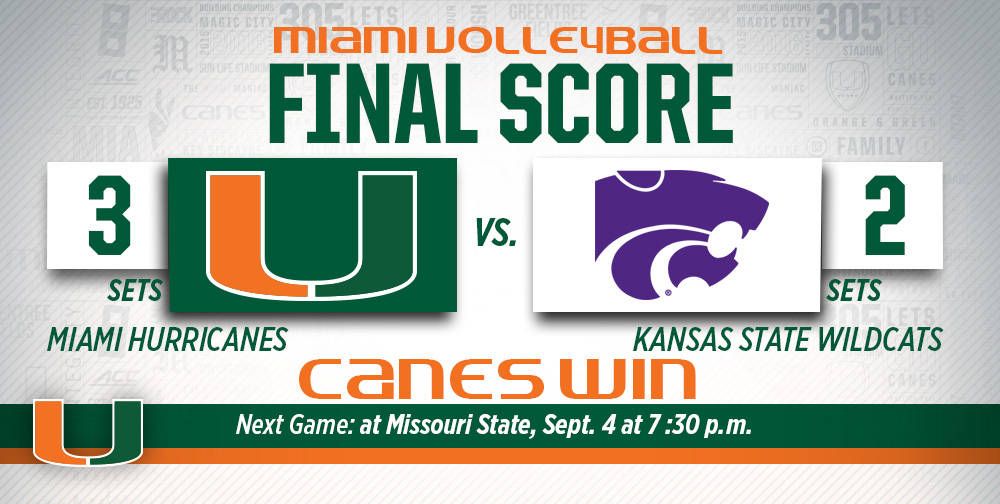 @CanesVB Beats K-State to Improve to 3-0

CORAL GABLES, Fla. – The University of Miami volleyball team went the distance and was victorious over Kansas State to close out the Hurricane Invitational.

The Hurricanes (3-0) and Wildcats battled back and forth in the sixth and final match of the Hurricane Invitational, playing five sets to decide who would finish the opening weekend of the 2015 season with an unblemished record.

“Every match is different,” Miami head coach Jose “Keno” Gandara said. “I think that we served better and passed better in this match. K-State is a quality opponent. They’re physical. I thought we covered their hitters well. We got second and third attempts at the ball. Early in the year, you expect some things, but you don’t know what’s going to happen until you play through it. Now we have some more information on the team. We know what we should be doing every day.”

The Canes took a 1-0 lead in the match thanks in part to strong performances by Kelsie Groot and Taylor Scott. Groot hit. 455 with a team-leading seven kills, while Scott added four kills and hit .429 to help Miami take the opening set 25-21.

Kansas State prevailed in a see-saw second set, 25-22, but several Canes stepped up before the intermission. Middle blockers Alexis Mourning and Sakile Simmons each had three kills in the second set, hitting .750 and .600, respectively.

Miami took a 2-1 lead after winning the third set 25-20. The Canes saw freshman Anna Haak and sophomore Olga Strantzali each tally four kills in the set, while Groot, Mourning and Simmons each added three kills for a balanced Hurricane offense.

The Wildcats were resilient and forced a decisive fifth set with their 25-20 win in the fourth set. Groot led the Canes with four kills in the set, but Kansas State was able to hit .361 against the Canes and extend the match.

The Hurricanes defended their home court, taking the fifth set 15-10, to close out a perfect 3-0 weekend at the Hurricane Invitational. Groot was huge for Miami, picking up four kills to drive the momentum for the Canes.

“The environment, the teamwork and the chemistry—it all finally came together,” Groot said. “For me, I really felt like everything clicked and I could just go out there and just focus on the game and not worry about much of the surrounding environment. That’s what we play for: to compete every single day. Every day at practice, we’ve worked for this moment to take this win.”

Groot was phenomenal for Miami, leading the Hurricanes with 19 kills and hitting a strong .357 for the night. The junior also recorded 12 digs to notch one of three Hurricane double-doubles in the match. Strantzali also joined Groot with a double-double, picking up 12 kills and 14 digs against the Wildcats.

“We keep pushing ourselves and keep improving every match,” Strantzali said. “The two teams were really evenly matched. In the fifth set, we stayed focused. I think we had a lot of energy in the end, which was the key.”

Miami also got strong play from its middle blockers as Mourning and Simmons were active offensively and defensively. Both players hit over .600 with Mourning closing out the match with nine kills, five blocks and a pair of aces and Simmons tallying eight kills and a team–high eight blocks.

“It’s good to have experienced players on there because we’ve been through it before,” Mourning said after the win. “We can tell our new players what to expect and not to freak out. We try to keep it a little bit calm, so I feel like it’s really good to have experienced players and our crowd really helped us get energy. I feel like without them, it probably wouldn’t have been as exciting.”

Sophomore setter Haley Templeton paced a Miami attack that hit .295 for the match, dishing out a career-high 55 assists and picking up 10 digs, three blocks and a pair of aces.

“I think we had girls do that all weekend,” Gandara said. “Taylor [Scott] had a good weekend. It was nice to see Anna [Haak] step in and do her job, Kelsie [Groot] bounce back from last night and Olga [Strantzali] from this morning to this evening. The middles have been consistent. Maybe they played some of the best volleyball to this point. Whoever’s out there is just doing their job and not thinking about who is on the court.”

The Canes are back in action next weekend at the Missouri State Tournament. Miami will face the host Bears, as well as Oral Roberts and Marquette, playing three matches over two days. The Hurricanes will face Missouri State at 7:30 p.m., on Sept. 4 in a match that will be broadcast on ESPN3. Miami will return to action on Sept. 5, playing Marquette at noon and Oral Roberts at 6:30 p.m. ET.