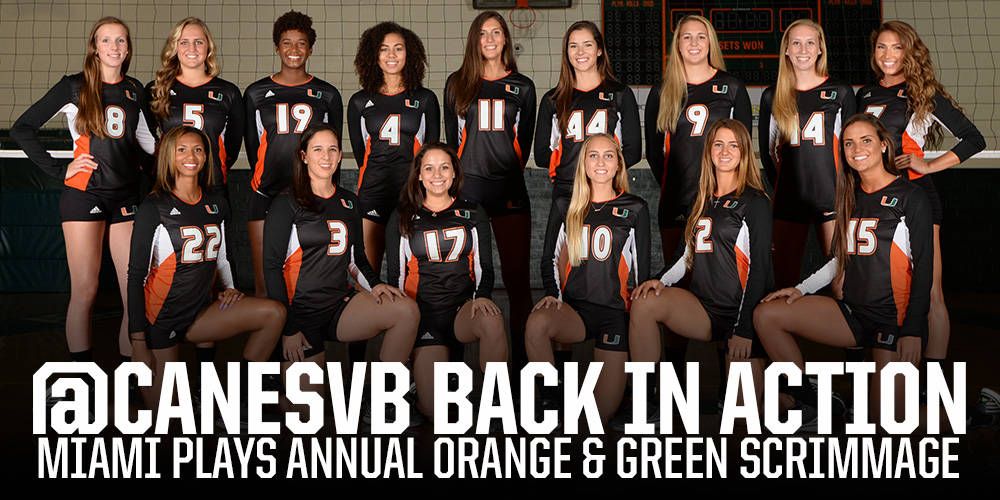 The Canes competed in front of their fans for the first time in 2015, facing off for four sets in the James L. Knight Sports Complex. All 16 members of the 2015 squad participated in Friday’s scrimmage with players mixing and matching lineups between both teams over the course of the night.

I thought the girls were composed,” Miami head coach Jose “Keno” Gandara said. “We did a lot of the things we do in practice, both the good and the bad which is something we need to understand when we train. We mixed parts and some girls did really well throughout the night and others had a little bit of up and down. It’s early in the season and there are a lot of new girls, so that’s understandable.”

Gandara observed his team, coaching both sides while assistant coaches Sanja Tomasevic and Kasey Crider each manned a bench. The third-year head coach felt his team had a solid showing in the scrimmage, but noticed a few standouts.

“I thought Kolby Bird was really steady and Olga {Strantzali] had some of her best volleyball to this point and Kelsie [Groot] was solid,” Gandara said. “In spurts some of the other girls were pretty good, but I thought those three players were pretty good the whole night.”

Bird is one of five freshmen on the 2015 roster and she shined in her first action at the Knight Sports Complex. The California native excelled in several aspects of the game on Friday, but her most memorable moment was finally taking the floor as a Hurricane for the first time.

“It felt like my dreams were finally coming true,” Bird said.” I’ve wanted to play college volleyball since elementary school. I was a little nervous, but once we started warming up I was fine. All the girls are awesome. Coming in I expected to feel more like a freshman but they are awesome and I love playing with them. This was a lot of fun and I can’t wait to play again next week.”

Fellow newcomer Olga Strantzali enjoyed her first appearance in Miami’s gym. The sophomore transfer fed off the support of the Hurricane faithful on Friday.

“It was amazing,” Strantzali said. “I loved playing in front of our fans. They gave us a lot of energy. I liked it a lot and I can’t wait to play against Illinois State next week.”

Miami opens the 2015 season on August 28 against Illinois State. The match, which begins at 7 p.m., is the first of three the Hurricanes will play in the season-opening Hurricane Invitational. Gandara would like to see his team refine a few things before next weekend’s opener.

“We have to invest in our blocking,” Gandara said. “I think we are close, but we are not getting what we want. We blocked 19 balls as a team, but I think we can do better. And I’d like to see some more consistency in our attacking and shot selection. I think we are not giving direction to the ball and hitting the easy shot instead of the good shot.”

Fifth-year senior Alexis Mourning returned to action for the first time since the 2013 season and enjoyed competing with her teammates again. But the two-time All-ACC middle blocker knows the Canes have work to do before the season officially starts.

“It was a lot of fun, but we saw a lot of what we need to work on,” Mourning said. “We just have to work on those things this coming week to get ready for the tournament. I am excited to finally play against another team.”

The Hurricane Invitational will feature Miami, Illinois State, Kansas State and Florida A&M in six matches over two days at the James L. Knight Sports Complex on the University of Miami campus. The Canes will face Illinois State on Friday, August 28, before hosting Florida A&M and Kansas State on Saturday, August 29. Admission is free to all Miami volleyball home matches in the 2015 regular season.