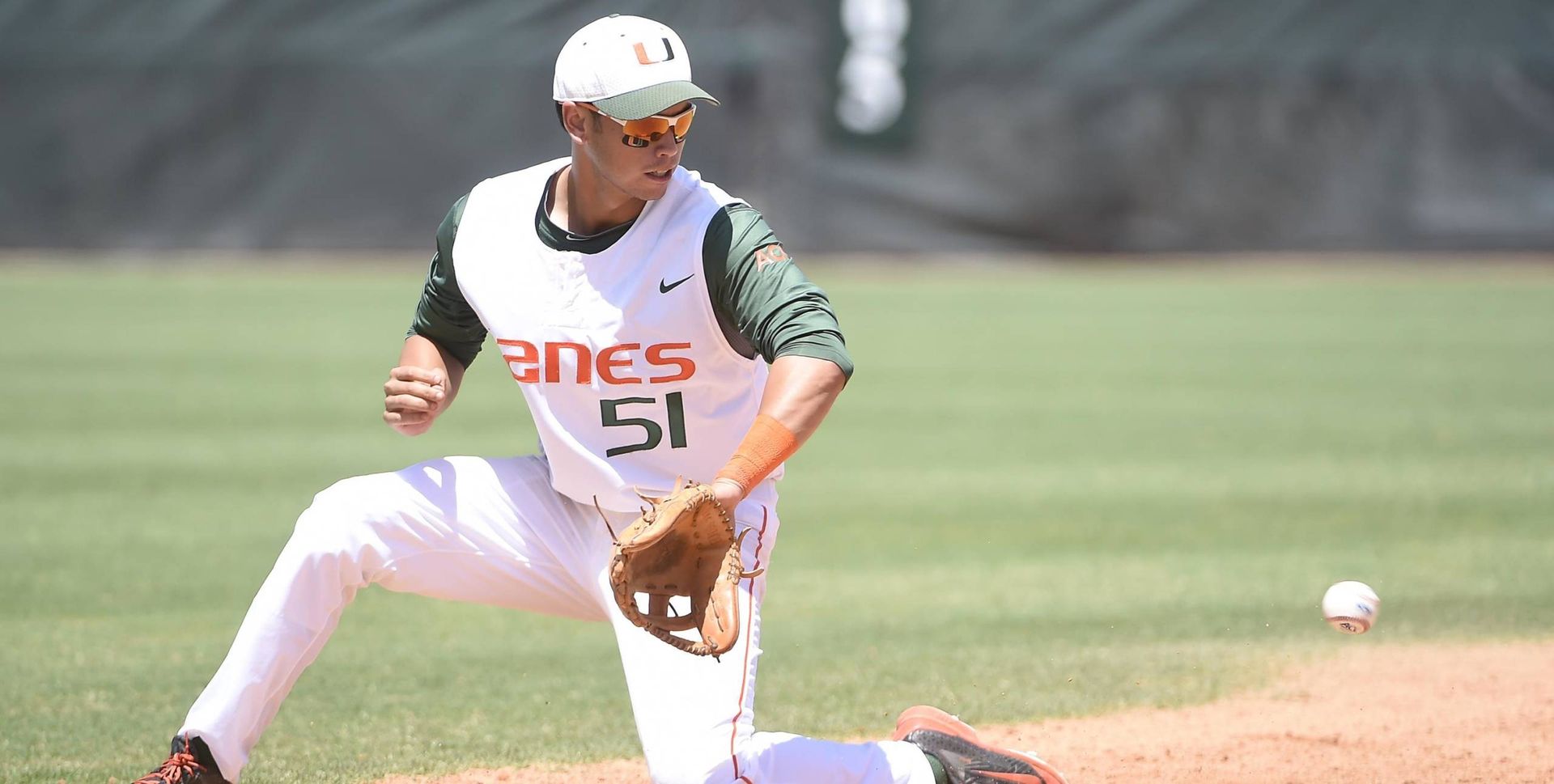 No. 11 Baseball Falls to WSU in Series Finale

CORAL GABLES, Fla. – No. 11 Miami dropped its series finale with visiting Wright State Sunday afternoon, falling to the Raiders by a final score of 12-6 at Mark Light Field.

The Raiders responded to a 3-0 first-inning deficit by plating six runs in the second and adding three more in the fourth. The Hurricanes, who recorded back-to-back walk-off wins in the first two games of the series, could not find any magic in their first home loss of the season.

Miami (8-4) cut the lead to 9-6 in the bottom of the eighth inning, but the Raiders (5-4) tagged Miami’s bullpen for three runs in the ninth to clinch the win.

“I think when we score six runs, we ought to win,” head coach Jim Morris said. “We can’t give up 12 runs like we did. With that said, I think we [also] should have hit the ball harder than we did.”

Sophomore outfielder Willie Abreu, who hit the gamewinning RBI single in the bottom of the ninth in Saturday’s thrilling 4-3 win, recorded a career-high four hits in the defeat.

The loss snapped a three-game winning streak for the Hurricanes, who captured their sixth straight home series victory.

“It doesn’t matter if we’ve won two [straight games], three, four or 20 before that. All we do is worry about the next one,” Abreu said. “Obviously we didn’t do what it took as a team to win this ballgame.”

Junior George Iskenderian, hitting third in the lineup for the first time this season, connected on a double to the leftfield corner in his first at bat that gave Miami two runners in scoring position. An RBI groundout from Zack Collins opened the scoring, an RBI single from Abreu made it 2-0, and a wild pitch from Swaney scored another run.

Swaney, who walked Michelangeli to load the bases with two outs, was pulled in favor of Jeremy Randolph. The decision paid off, as Randolph (1-0) retired Brandon Lopez and held Miami’s lead to just three runs.

Beauprez cruised through the first inning but struggled with his command in the second after his team spotted him a 3-0 lead. A failed pick-off attempt scored a run, a two-RBI double from Mitch Roman gave Wright State the lead, and a two-RBI single from outfielder Andrew McCafferty capped a six-run second inning for the Raiders.

Luke Mamer, one of six Wright State pitchers to see action in front of a Sunday crowd of 2,377, allowed just one run in 4.0 innings. Freshman Carl Chester’s fourth-inning solo home run was the lone blemish on an otherwise impressive outing from Mamer.

“When you get to their bullpen early like that, you have to score more runs and hit the ball harder,” Morris said. “I would like to see us pitch better and swing the bat better.”

Senior Daniel Briggi was one of Miami’s top contributors Sunday. Making just his second appearance of his career, the senior walk-on tossed 3.0 scoreless innings in relief and struck out a career-high four batters.

“I just try to pitch. It doesn’t matter what the score is, I go in and try to pitch, do the best you can with what you’re given,” Briggi said. “I made a couple of pitches, got comfortable and went from there.”

The positives of winning the series against the reigning Horizon League champions was not lost on Briggi and the Hurricanes, who open ACC play next weekend.

“We won two close games coming from behind the first two nights,” Briggi said. “As we go down in the season, we’re going to have to win close games…seeing that we can come back against their best arms, seeing that we have that in us, was a positive to take away.”

Morris and the Hurricanes will travel to Roger Dean Stadium in Jupiter, Fla., for an exhibition with the Miami Marlins on Tuesday before a midweek home contest with FGCU on Wednesday.

“It’s a game you have to play every day. I think Wright State has a very good club,” Morris said. “I think they’re a club that will go to the NCAA Tournament, and if I had to bet, they’ll have a great chance to win their conference. They’ve got some good players, and they’re well-coached.”

First pitch for Wednesday’s exhibition against the Marlins, slated for broadcast on WVUM 90.5 FM and 940 WINZ, is slated for 1:05 p.m.