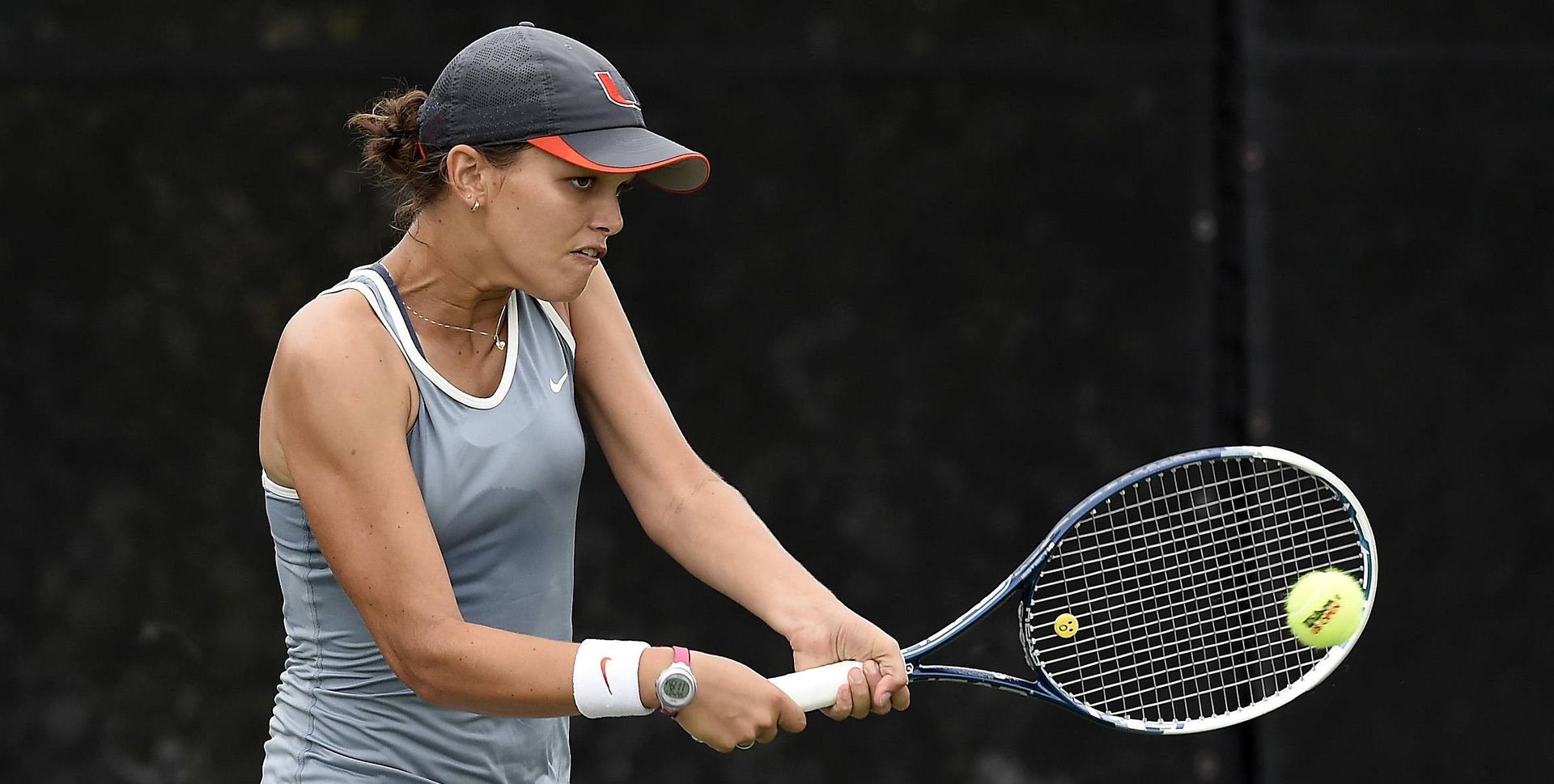 The No. 12 Hurricanes defeated the nation’s seventh-ranked team, 4-1, and led in the two unfinished matches as well.

“This team played as one today and that’s what we need to continue doing moving forward,” Yaroshuk-Tews said. “We fought hard, but most importantly, fought smart when it got rough.”

Senior Monique Albuquerque and junior Clementina Riobueno, the nation’s No. 15 doubles pair, then took down Danielle Spielmann and Emily Zabor, also by a score of 6-3.

The decisive third doubles match came down to a tiebreaker and it was Miami’s freshman duo of Sinead Lohan and Wendy Zhang who got the job done. Lohan and Zhang, ranked No. 37, won 7-6 (8-6) over Natalia Maynetto and Luicelena Perez to give the doubles point to the Hurricanes.

“So proud of our entire team, but especially our freshmen today,” Yaroshuk-Tews said. “To clinch the doubles point and then play the type of tennis Sinead played [in singles] was amazing.”

Lohan and Clementina Riobueno, ranked No. 39 and No. 88 respectively, both won their singles matches in straight sets to put Miami ahead 3-0.

After No. 58 Wendy Zhang dropped her singles match to Luicelena Perez, 2-6, 6-2, 6-1, Miami needed just one point from the group of junior Stephanie Wagner, senior Lina Lileikite and senior Monique Albuquerque, all of whom went to three sets as well.

Ultimately, it was Albuquerque who clinched the match for Miami. After dropping the first set 6-2, the Porto Alegre, Brazil native won the second 6-2. She then fell behind 3-0 and 4-1 in the third set, but would not be deterred. Albuquerque took five straight games to win 2-6, 6-2, 6-4 and give Miami the victory.

“I got to her court at 3-0 down and saw that Nique was playing too close to the baseline,” Yaroshuk-Tews said. “She made some quick adjustments and the match turned. Monique played like a real senior today.”

No. 94 Lina Lileikite was ahead 5-4 in the final set of her match against No. 59 Maya Jansen when the Hurricanes clinched the win to advance to the quarterfinals.

Seventh-ranked Stephanie Wagner was also ahead when play stopped. She led the third set 2-1 over No. 25 Erin Routliffe.

“When you’re given a team like Alabama who’s obviously very comfortable inside, we knew we needed to out-compete them,” Yaroshuk-Tews said. “Tactically, we took care of what we needed to take care of. We played them in a way that gave them the least amount of opportunities to attack us.”

Miami’s next opponent will be a familiar one, as the Hurricanes will meet another ACC school, North Carolina, in the quarterfinals. The Tar Heels won 5-1 over No. 16 Oklahoma State in their opening match.

“They’re a great team,” Yaroshuk-Tews said. “They’re a team that we see a lot and we respect. It should be a fun day.”

The Hurricanes and the third-ranked Tar Heels will square off Saturday at 12:00 p.m.