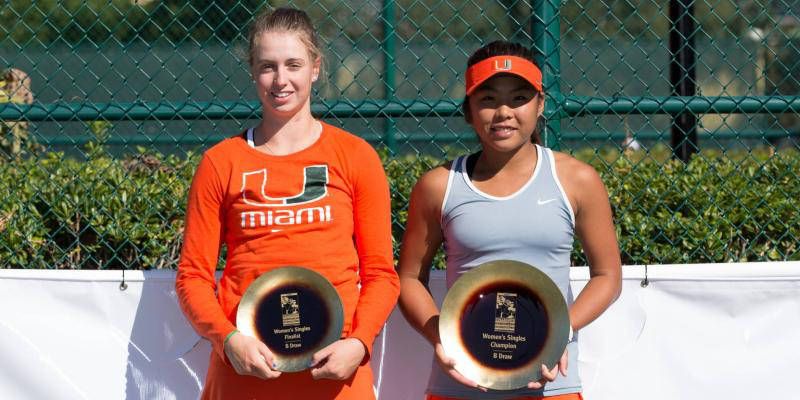 In a championship match pitting two Hurricanes against each other, Zhang defeated fellow UM freshman Sinead Lohan, 6-3, 6-2. Zhang was the No. 3-4 seed in the draw and beat  the top seed, No. 79 Yukako Noi of Florida State, Saturday to advance to the final. Lohan was unseeded, but made an impressive run to the title match.

Zhang received strong praise from her coach about her stellar showing in the four-day event.

Zhang and Lohan were just two of the four Hurricanes to play in title matches on Sunday, as junior Stephanie Wagner and freshman Silvia Fuentes also reached the finals of their respective draws.

Wagner, ranked No. 18 and the No. 1 seed in the A Draw, played a close match with Joana Eidukonyte of Clemson, but came up on the short end. The Amberg, Germany native narrowly lost the first set and then claimed the second, but the decisive third set did not go her way. Wagner wound up losing the final, 7-5, 4-6, 6-3.

In the C Draw finale, Fuentes also had a tough three set defeat, hers at the hands of Virginia Tech’s Katherine Butler. Fuentes, seeded No. 1 in the draw, took the first set in commanding fashion, but Butler came back strong after that to win the match, 1-6, 6-3, 6-4.

Over the four days of the USTA Clay Court Invitational, Miami’s eight participants had a record of 21-8. Six Hurricanes reached the quarterfinals of their respective draws, five made the semifinals, four got to the finals, and one won a title.

“Team seems to be meshing well and learning from one another,” Yaroshuk-Tews said after the conclusion of the tournament.