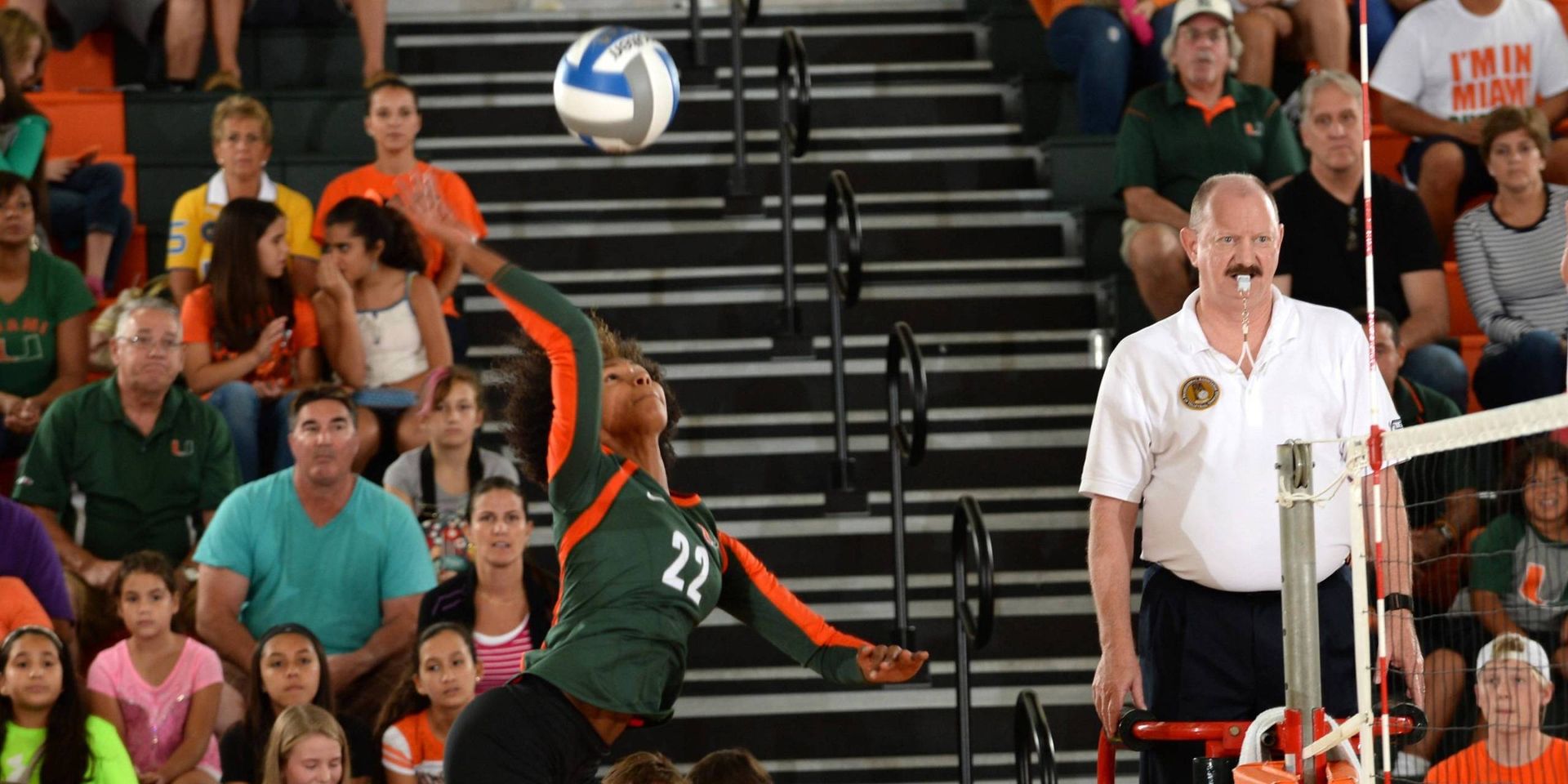 The Canes, who wore pink warm-ups and donned pink socks in support of breast cancer awareness, battled back from a 1-0 deficit to improved to 12-6 on the season and 5-2 in the ACC. Miami has now won eight of nine matches at the James L. Knight Sports Complex this season.

“Virginia Tech is a good team. They’re well coached and they came out fighting,” Miami head coach Jose “Keno” Gandara said. “I have to give them some credit. They served tough and our girls kind of got on their heels a little bit. I like the way we responded. We were way more aggressive from the serving line, from the receiving line, our blocking was better and we kept our composure. We had only nine errors for the match on 117 swings. That’s really good. Everybody hit over .300, so it was a good night for everybody. Haley [Templeton] did a good job. We battled. That’s we have to learn how to do.”

Virginia Tech took a 1-0 lead in the match, winning the first set, 25-20. The Canes, who had six players record at least one kill in the opening set, could not keep up with a Hokies’ attack that hit .382 in the opening set.

“We just had to forget about it,” freshman Sakile Simmons said. “When you’re down like that you can’t dwell on it because then it’s going to carry over to the next game, so you just forget and play better. We focused a lot on blocking, getting our hands over the net fast and hitting the right position.”

Miami charged back in the second set, evening the match at one set a piece with a 25-15 victory. Savanah Leaf’s six kills led a Miami attack that hit .417 in the second set. Leaf, who hit .857 in the set, was one of four Canes to secure a kill in the set and help Miami head into the intermission tied, 1-1.

The Canes took a 2-1 lead after the intermission, winning the third set, 25-18. Miami hit .600 in the third set, led by Leaf’s six kills and four from Taylor Scott. Kelsie Groot had one of three Miami aces in the third set and secured the 25-18 victory with her seventh kill of the night.

Miami took the fourth set, 25-19, thanks in part to a strong showing by senior Emani Sims. The middle blocker, who finished with 10 kills on the night, hit .833 with five kills in the final set of the night.

“They’re a good team, so we had to really get together and realize that we needed to play the game the way we wanted to,” Scott said. “This win is big for us, especially on our home court. I am excited for Sunday.”

The reigning ACC Player of the Week, Leaf led all players with 18 kills, adding two aces and 11 digs to record her seventh double-double of the year. Sims finished with 10 kills, two aces and a team-high four blocks, while Scott also tallied 10 kills and added eight digs.

Groot, who had eight kills and two aces, led all Hurricanes with 14 digs. Simmons finished the night with six kills and added three blocks.

Freshman Haley Templeton paced the efficient Miami attack. The talented setter dished out 47 assists and added an ace while helping Miami’s attack hit .376 for the match.

“Haley did a really good job putting us in good situations, so if you have a good setter like that it’s easier,” Scott said. “She deserves all the credit.”

The Canes are back in action Sunday at 1 p.m., when they will host Georgia Tech. Admission is free.