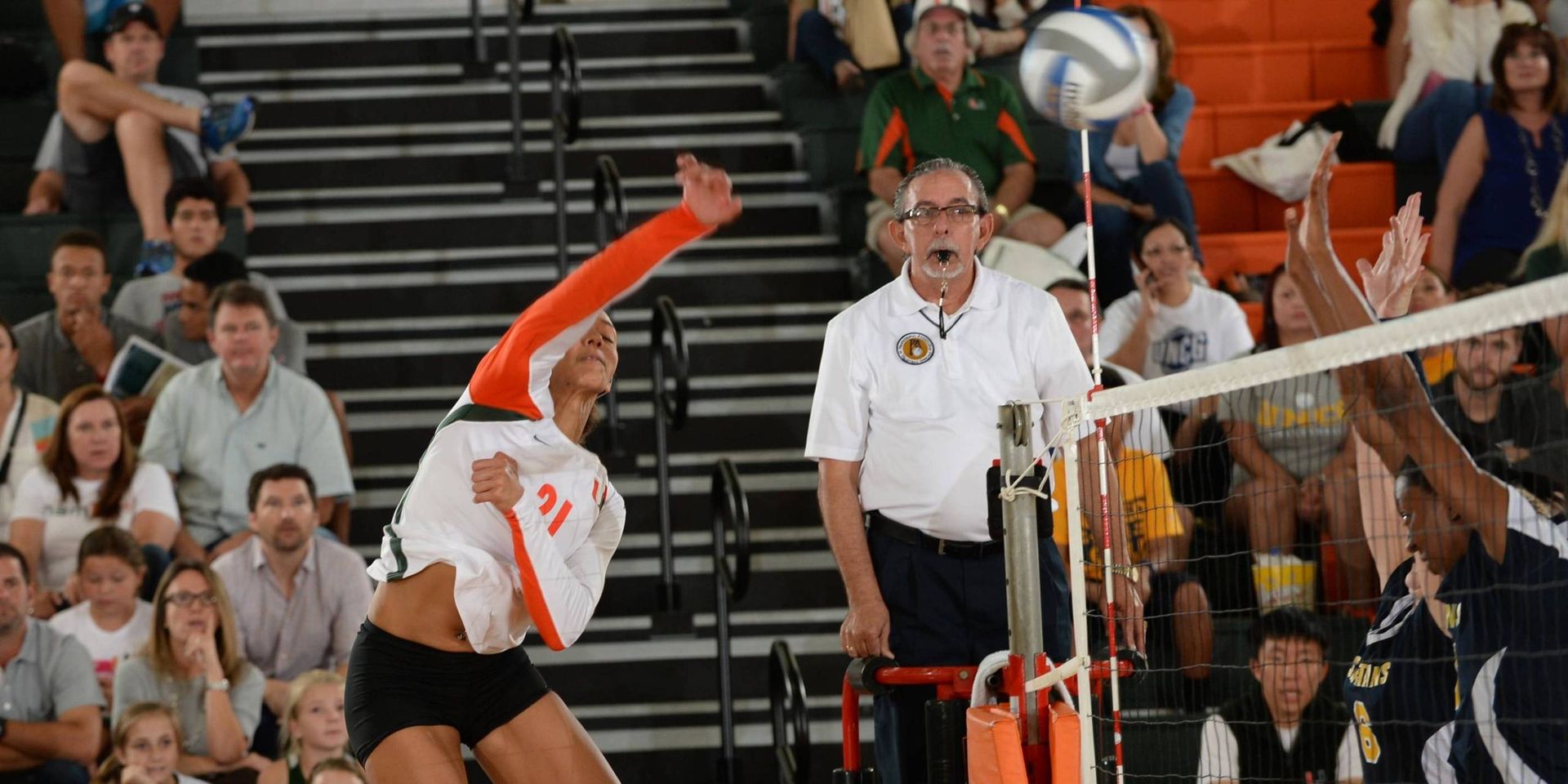 The four-set match was a competitive one between the Hurricanes and Tigers. Miami head coach Jose “Keno” Gandara is pleased to see how his team responded to adversity and continues to improve from match to match.

After going down, 2-0, Miami rallied to score eight straight points before Clemson called timeout.  The Canes used their positive momentum to carry them to a 25-11 victory in the first set. Savanah Leaf led Miami with seven kills in the first set, while Haley Templeton dished out 11 assists and Emani Sims and Leaf combined to lead the Canes with two blocks each.

“I thought we served really well in Game 1 and we got them in trouble,” Gandara said. “Our defense was good and our transitions were good. Everything went well and it was kind of easy on our side.”

Clemson opened the second set on a 5-0 run before Leaf snapped the streak with a kill. Miami could not slow a Tigers team that hit .326 in the second set. Clemson evened the match at one set apiece with a 25-17 win.

“I think we kind of got ahead of ourselves and when we started getting down, we didn’t know how to come back from it and that was the struggle in the second game,” Leaf said. “As soon as we came out of the break, we started focusing on ourselves and figuring out what we needed to do to win. That’s when we turned things around in the third game.”

The Tigers opened the third set on a hot streak, taking a 7-3 lead, before Miami scored nine of the next 12 points to grab a 12-10 lead. The two teams battled back and forth, reaching a stalemate at 20. The see-saw battle continued and Miami and Clemson tied again at 23. The Tigers were at set point, 24-23, before Leaf evened the score at 24 with her 12th kill of the night. The Canes took a 26-25 lead thanks to another Leaf kill and Miami took a 2-1 lead in the match with their 27-25 third set victory.

“In Game 2, they got on a good run early and challenged us,” Gandara said. “We couldn’t pull it off, but we played well at times. We had a good game in the third set. It was a battle and we responded the right way. I like that. It’s what our team needs.”

Miami jumped out to a 8-3 lead in the fourth set and extended its lead to 10, 13-3, forcing the Tigers to call their second timeout of the set. The Canes continued their hot streak in the fourth set, closing out the match with a 25-12 win.

“We have been working all week to make sure we have a presence on all sides,” Leaf said. “I think we showed that tonight. It’s easier for everyone when all of us are contributing. Kelsie was pulling blocks and so were the middles. We all were opening lanes up for each other. That helped us a lot.”

Leaf, who hit .395 against Clemson, led Miami 18 kills and 14 digs to go with four blocks. Sophomore Kelsie Groot also was a force for Miami’s offense, tallying 14 kills while hitting .400.

Junior outside hitter Taylor Scott added six kills and 16 digs, while defensive specialist Kalysta White led the Hurricanes with 20 digs. Templeton, who had one of three Miami aces, distributed 44 assists and helped the Canes hit .290 as a team.

Miami returns to action Sunday when they host No. 5 Florida State. The Seminoles are 13-0 and one of only five undefeated teams in the country. Sunday’s match versus instate rival FSU begins at 2 p.m. Admission is free for all fans and the first 150 students will receive a Renewed Heart T-shirt.