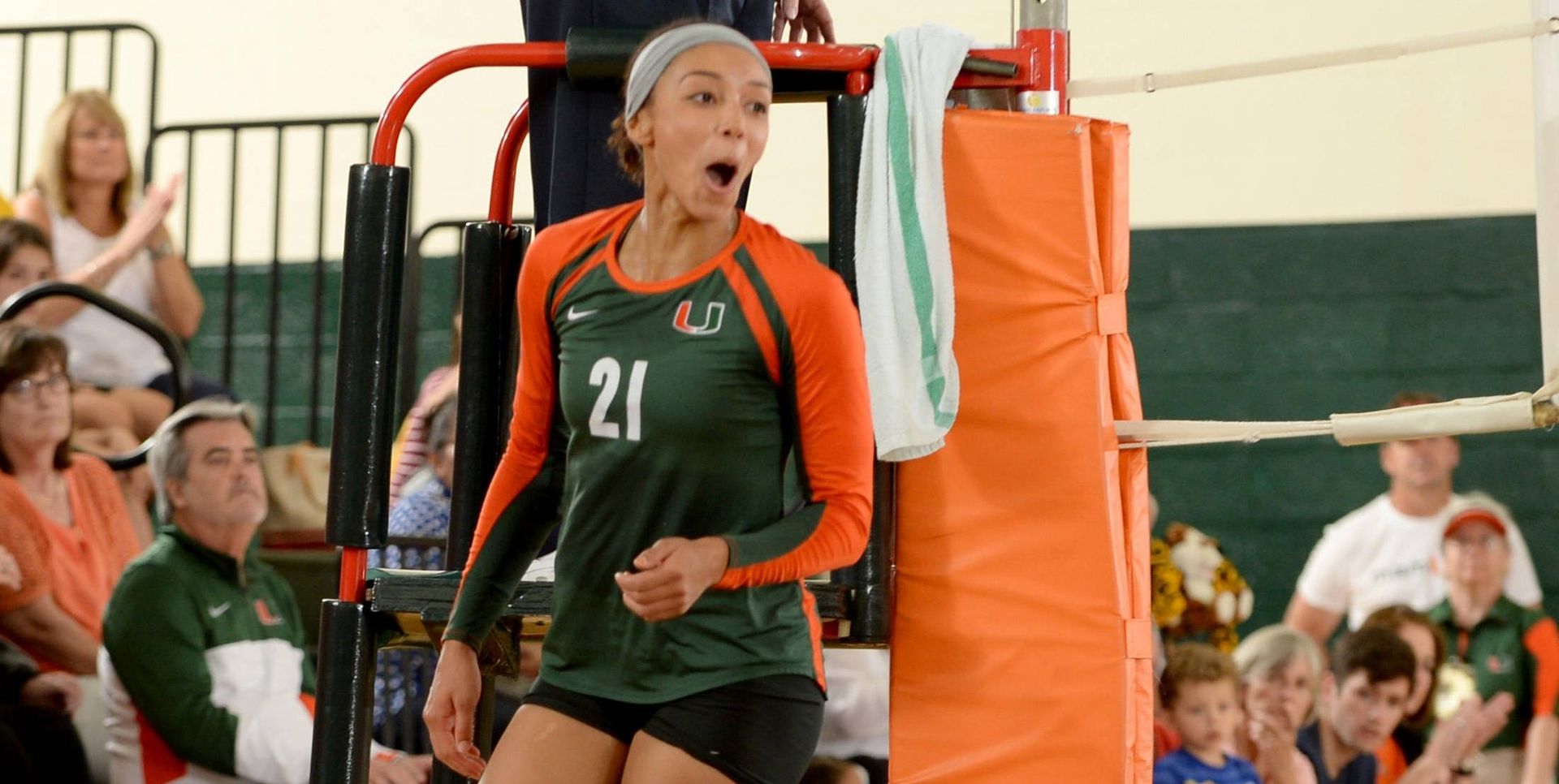 The Hurricanes hit. 271 as a team and tallied 10 aces on their way to a three-set win over the Fighting Irish.

“I like that we were able to carry out the game plan,” Miami head coach Jose “Keno” Gandara said. “We kind of started recently to focus a little more on that. They did a nice job. Our serving was great, the way we want it. We did what we had to do.”

The Canes took a 2-0 lead into the intermission thanks to a strong showing by several players in a 25-17 second set victory. Taylor Scott led Miami with four kills, while Leaf, Sims, Sylvia Hernandez, and Kelsie Groot each added a service ace.

Miami took the third set, 25-13, to complete the sweep in their ACC opener and remain a perfect 6-0 at home this season.

“The setters did a great job tonight,” Leaf said. “Also, the middles were up every time giving me a lot of seam balls to work with. I think it was just the compilation of everybody together. The passes were good. We kind of all were working together, so everyone kind of contributed to that.”

Leaf was the most dominant player on the floor Friday night, finishing with 16 kills and a .517 attack percentage, as well as three services aces and 10 digs.

“Savanah had one attack error and it was a good error,” Gandara said. “She’s doing a better job getting her feet to the ball. She hit in all kinds of situations, in good sets, bad sets. She’s learning how to handle that at her position and that’s a big deal. She has to do that for us to be successful.”

Scott and freshman Sakile Simmons were also active on the attack. Scott, a junior, finished with seven kills and nine digs, while Simmons recorded six kills and a team-high four blocks.

Miami finished with 10 aces on the night: three from Leaf, three from Templeton, two by Sims and one each from Groot and Hernandez.

“We put in a lot of work towards that and I think it really shows like it did tonight,” Leaf said of Miami’s serving. “It’s good for working on our passes, as well, because we’ve been playing against some great servers in practice.”

The Canes will travel to Durham, N.C., for a Sunday afternoon match against Duke. Sunday’s match against the Blue Devils will be broadcasted on ESPN3 beginning at 1 p.m.

“Duke is an amazing team,” Leaf said. “This [win] builds a lot of confidence, but we take it one game at a time. Duke is going to be a great game. They have a different sort of offense. They play a little differently, so we’re going to have to change our mindset and get ready for that game now.”