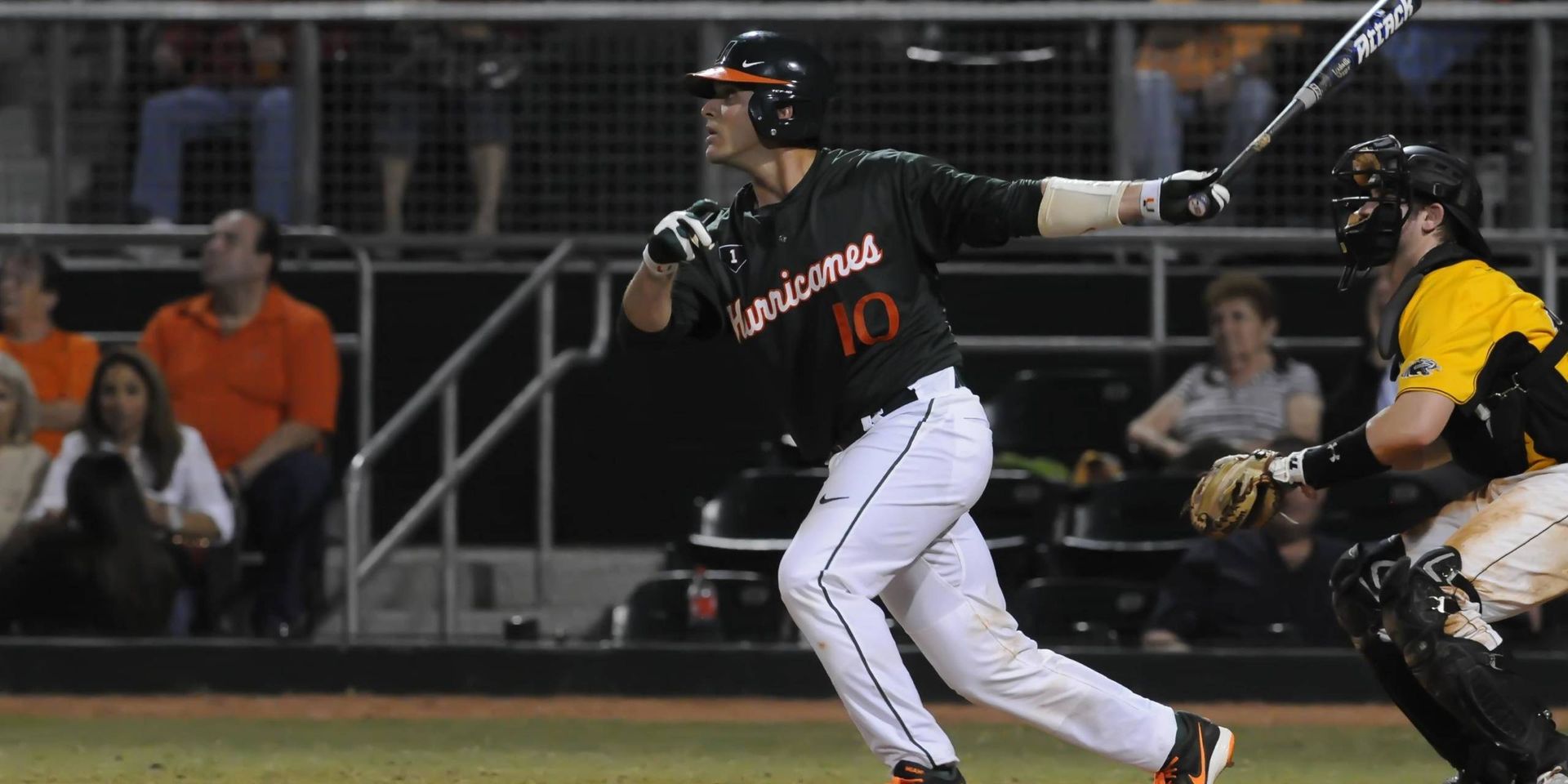 GAINESVILLE, Fla. – Behind an impressive start from Chris Diaz and a game-winning single from David Thompson, No. 20 Miami continued its perfect season Friday night, taking the series opener with in-state rival Florida by a final score of 3-2.

After Florida tied the game at 2-2 in the eighth inning, a clutch two-out single from Thompson led Miami to its tenth straight victory to open the season. With the win, Miami snapped an 11-game losing streak to the Gators, a stretch that dated back to the March 2010 regular season series in Coral Gables. The Hurricanes, one of four undefeated teams in the Atlantic Coast Conference, are now 10-0 for the first time since 1981.

Diaz, who entered the opener sporting a 0.75 ERA, delivered another strong start on a chilly night at McKethan Stadium. The Florida City, Fla., native went a career-high seven shutout innings, scattering eight hits while working his way out of tough jams. He battled his way to a career-high 101 pitches, 67 of which went for strikes.

The southpaw extended a solid season-opening stretch for Miami’s weekend rotation, which has allowed only three combined runs across seven starts and 40.2 innings of work.

It was Miami who struck first off Gators’ starter Jonathan Crawford, as the first career homerun from senior catcher Alex San Juan gave the visitors a 2-0 lead in the top of the fourth. The no-doubt shot to left plated junior Brad Fieger, who extended his hitting streak to nine consecutive games earlier in the frame with a double.

Miami could have been leading by more, having stranded runners six runners through the game’s first four innings. The Hurricanes nearly opened the scoring in the second, when singles from San Juan and Brandon Lopez sandwiched around a walk to Dale Carey loaded the bases. But Crawford induced a fielder’s choice from junior Tyler Palmer to end the scoring threat. By game’s end, Miami had stranded 10 runners.

The Hurricanes looked like they would add to their advantage in the seventh, when reliever Daniel Gibson plunked Alexander Hernandez and allowed a follow-up single to Chantz Mack. But Jay Carmichael, who came on in relief of Gibson, retired the next three Miami batters to keep the lead at only 2-0.

Florida tied the game in the eighth, scoring two runs on Miami miscues. After a passed ball from San Juan advanced Gators’ sophomore Josh Powers (walk) to second, junior Bryan Radziewski allowed an RBI single to Vickash Ramjit to cut the lead in half. Senior Eric Nedeljkovic, on in relief of Radziewski, then induced a high pop-up from pinch-hitter Christian Dicks, but Lopez dropped the ball from his perch at short to plate the tying run.

Thompson delivered the heroic hit in the top half of the ninth. After Chantz Mack reached base with a two-out single and stole second base, Thompson drove the senior in with a single up the middle. The hit was Thompson’s third gamewinner of the season.

The Hurricanes return to McKethan Stadium for game two of the series on Saturday. First pitch is set for 7:30 p.m., with live broadcast set for Sun Sports.