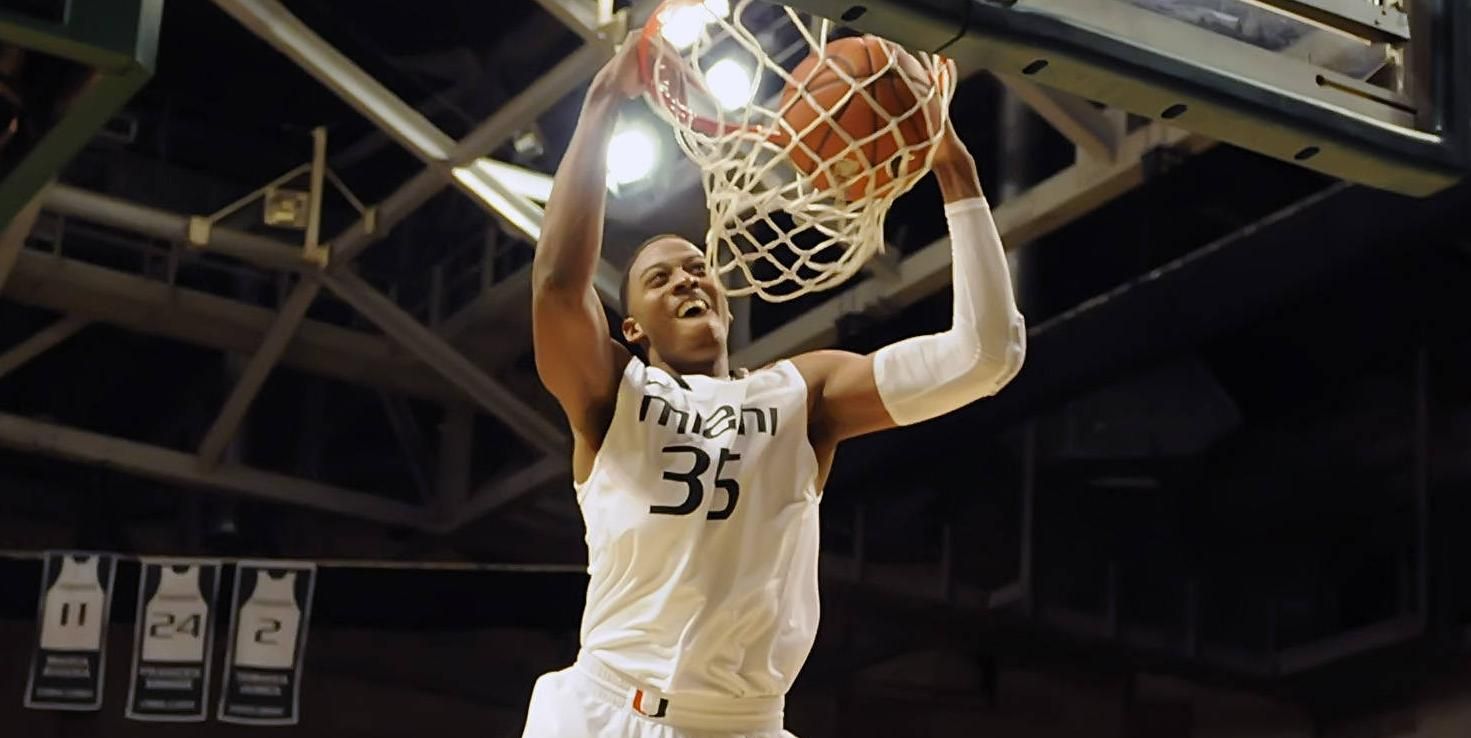 CLEMSON, S.C. (AP) – Kenny Kadji scored 12 points, including the go-ahead 3-pointer with 36 seconds left to keep No. 3 Miami perfect in Atlantic Coast Conference play after a 45-43 victory over Clemson on Sunday night.

The Hurricanes (21-3, 12-0) finished with their fewest points of the season, and their high-scoring guard duo of Durand Scott and Shane Larkin were a combined 3-of-16 shooting for 10 points. Still, Miami pulled it out on Kadji’s wide-open 3.

Clemson (13-12, 5-8) had three chances to answer back, but Rod Hall was called for an offensive foul on one trip and, after Trey McKinney Jones made a foul shot, Hall missed a layup and K.J. McDaniels failed on a tip.

The Hurricanes hugged each other when the horn sounded, grateful to escape on the road and continue the league’s longest undefeated start since Duke went 16-0 in 1998-99. They’ll likely supplant the Blue Devils, who lost Saturday 83-81 at Maryland, as the country’s No. 2 team when the new rankings come out Monday.

Freshman Jordan Roper had a career-high 19 points for the Tigers. Devin Booker added 10 points and 11 rebounds, his fifth game this season with double-figure points and rebounds.

Miami has won 13 straight, probably few as dramatic as this one. The Hurricanes struggled to shoot throughout and trailed 42-38 when Roper went coast-to-coast for a layup with 2 minutes left. Larkin quickly shot a 3-pointer that went in and out and Clemson could smell the upset as McDaniels headed to the foul line for a one-and-one. But he missed the free throw and Rion Brown drove the lane and got fouled for a three-point play to draw Miami within a point.

McDaniel made one of two foul shots before Kadji stroked the open 3 to put Miami in front for good.

It was the second straight home heartbreaker for the Tigers, who were beaten 58-57 by North Carolina State on Scott Wood’s 3-pointer at the end.

Scott shot 1 of 8 and scored three points – he came in averaging 14 per game – but grabbed 11 rebounds, one shy of his career high.

Miami came in as the first ACC team to go 11-0 since North Carolina in 2000-01. The Tar Heels, who were No. 1 and had won 18 in a row at the time, saw the streak end at Littlejohn Coliseum in a stunning upset – the Tigers lost the previous game by 34 to North Carolina State and their next one by 32 to Wake Forest.

The Hurricanes looked as though they wanted to take this one over early, taking an 8-2 lead on Jones’ 3-pointer with 11:37 to go. The Tigers, though, shook off a slow start – they opened 1 of 17 from the floor and missed 15 straight shots – with a 13-4 run to move in front 15-12 after Booker’s strong, one-handed jam.

Miami found its stride late in the half to pull ahead 18-16 on Brown’s jumper.

Neither team was all that crisp shooting in the opening half. Miami hit just 25.9 percent (7 of 27) while Clemson finished at 23.3 percent (7 of 30). The teams really struggled from way outside, combining to go 2 of 21 from 3-point range.

It didn’t help the Hurricanes that Scott, their leading scorer, picked up two early fouls and played just 7 minutes in the first half. Larkin missed three of four shots while Kadji made only two of his six attempts.

Clemson was even worse as its two seniors, Booker and Milton Jennings, combined to go 2 of 14 from the field. The Tigers forced eight Miami turnovers to keep themselves in the game.

Miami is the first team in the ACC other than Duke or North Carolina since Virginia in 1981-82 season to go 12-0 in conference play.

Miami, who scored 18 points in the first half, recorded their lowest scoring half of the season. This was also the Hurricanes lowest scoring game of the season with 45 points. Their previous low for a half was 19 vs. Maryland on Jan. 13, 2013. Their previous low for a game was 50 points vs. Arizona on Dec. 23, 2013 and 54 points in conference play vs. Maryland on Jan. 13, 2013.

The Hurricanes were held to a conference season-low 34.6 % shooting from the field. Their previous low was 34.9% on Jan. 13 vs. Maryland.Miami held Clemson to 43 points, recording their lowest opponent point total this season. Their previous low was 46 points vs. Charlotte on Dec. 14, 2012, and 47 points in conference play, which was recorded against both Maryland and Florida State.

Erik Swoope, who scored at the 6:02 mark in the first half, recorded his second straight game with a field goal. Swoope has gone two straight games without a field goal prior to scoring in the Florida State and Clemson games.

Durand Scott tied his career-high in rebounds with 12. It was his fifth career game with double-digit rebounds. Scott’s set his career highat 12 against UNC Greensboro on Feb. 15, 2011.

Durand Scott, who finished the game with three points, entered tonight’s game with 1,496 career points, he is now one point away from scoring 1,500 career points in his collegiate career.