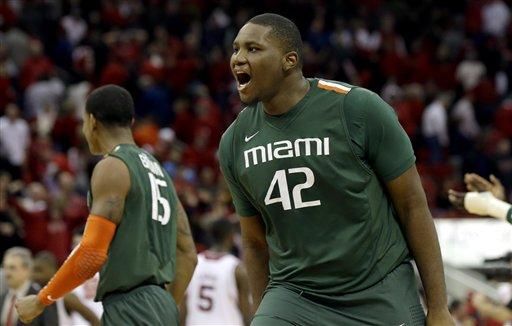 Johnson’s left-handed tip in traffic off a miss by Shane Larkin capped a back-and-forth second half and kept the Hurricanes (17-3, 8-0 Atlantic Coast Conference) unbeaten in the league. Johnson finished with 15 points in his best game since returning from a thumb injury four games earlier.

C.J. Leslie had 18 points and 12 rebounds to lead the Wolfpack (16-6, 5-4), who played without starting point guard Lorenzo Brown due to an ankle injury. N.C. State nearly topped Johnson’s tip when freshman Rodney Purvis launched a heave from beyond halfcourt at the horn, a shot that hit the rim and rattled out to end it.

The Hurricanes were only the ninth team to start 7-0 in ACC play since the 1996-97 season and first since Duke started 10-0 five years ago, according to STATS LLC. Miami certainly earned its latest league win, fighting off a determined Wolfpack team that got strong performances from Purvis and fellow freshman Tyler Lewis in place of its missing floor leader.

Lewis, who hadn’t scored more than six in a game all season, finished with 16 points and five assists in 36 minutes. But he missed a contested jumper with about 13 seconds left, and Miami grabbed the rebound and called timeout with 10.9 seconds remaining to set up the final play.

Larkin’s shot on the right side bounced off the rim, but Johnson tipped the ball up and in to stun the home crowd that had been as loud as it was for rivalry wins against Duke and North Carolina this month.

It was the first home loss in 13 games for the Wolfpack, the preseason ACC favorite.

Miami led by nine in the first half and N.C. State led by 10 midway through the second half, while the Wolfpack shot 54 percent for the game. Miami shot 49 percent but went just 3 for 21 from 3-point range.

Miami Hurricanes tickets can be purchased at CanesTix.com or by calling the BankUnited Center Ticket Office at 305.284.2263. The ticket office is open Monday-Friday from 8:30 a.m. – 5 p.m.