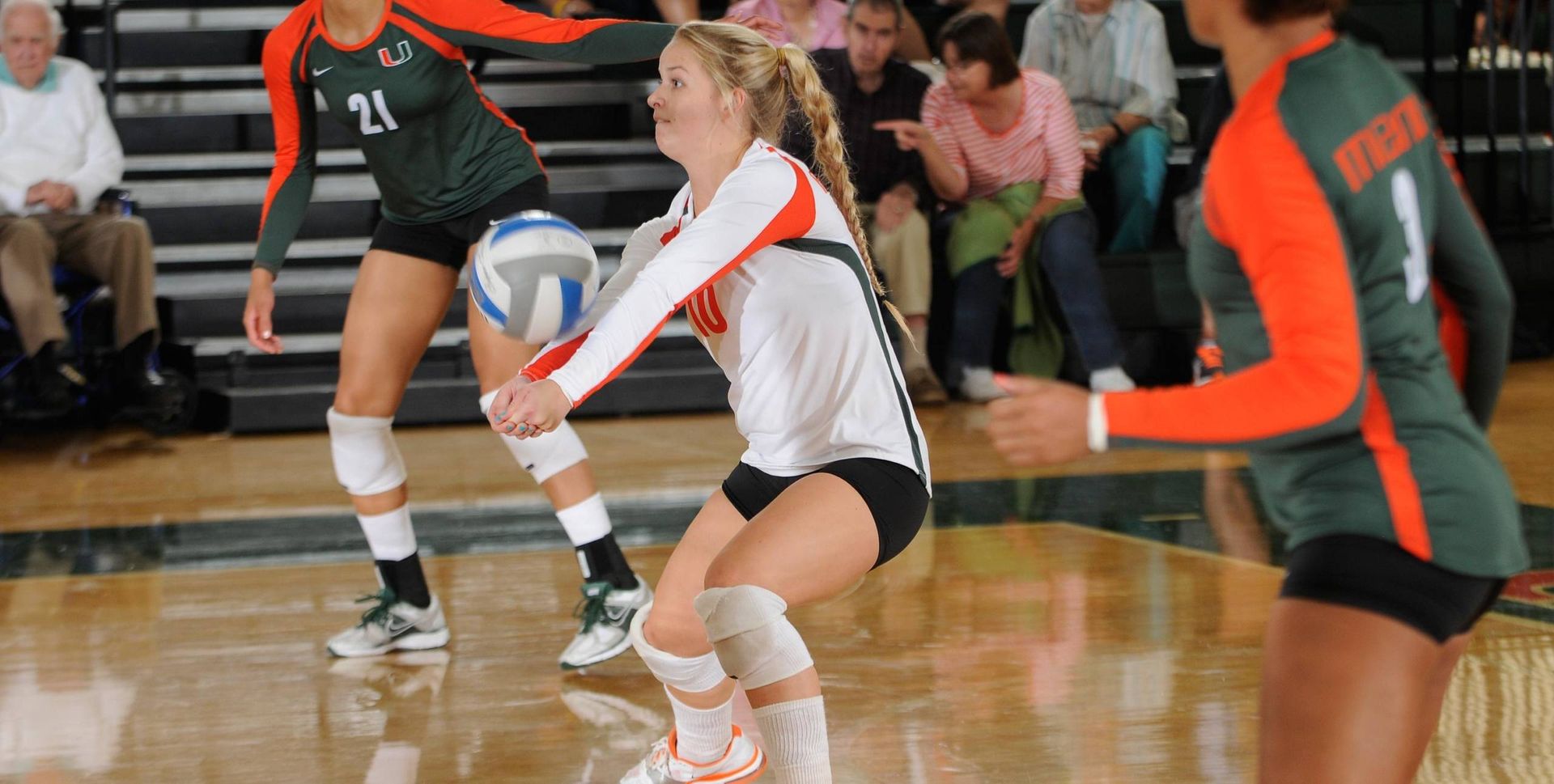 “Weare always working on getting off to strong starts,” head coach Nicole LantagneWelch said. “We also talked about coming out focused after the break and tonightwe were able to do both.”

Miamiput up its best defensive effort of the season statistically, holding theEagles to 46 points for the match, the least amount surrendered this year. TheCanes recorded a .343 hitting percentage compared to BC’s .127. Junior liberoRyan Shaffer led the charge with a match-high 17 digs in the back row.

“Theiroutside hitters had quite a bit of success against us the last time, so it wasdefinitely a priority to make sure we did a better job defensively to slow themdown,” Lantagne Welch said. “I thought our blocking was solid and we made someplays to keep the ball alive.”

Playingin her second to last match at home, senior setter Nrithya Sundararaman put up34 assists, while slamming down a season-high five kills in seven attempts. Sheentered the weekend leading the ACC in assists per set (10.63).

Inthe first set, Miami won the first four points and 10 of the first 13 toestablish early momentum. From there, Boston College could only get as close asfive, with Miami going on a late 6-2 run to take the opener.

Thesecond set also did not feature any ties or lead changes, as the Canes went up10-5 on a block assist by junior right side Alex Johnson and sophomore middleblocker Emani Sims. A 7-2 spurt upped the lead to seven, and a kill from Simsat 24-15 gave UM the 2-0 lead heading to intermission.

TheEagles put up resistance in the third set, taking a 7-5 lead. However, Miamiwent on an 11-3 run after the score was knotted at nine to take a commanding20-12 lead. Four straight points on serves by Mourning ended the match, with freshmanoutside hitter Kelsie Groot concluding the night on a kill. It was the 11thsweep for the Canes this season and sixth at home.

BostonCollege fell to 10-20 on the year and 4-14 in the league, as the Canes have nowtaken the last 10 in the series.

UM willlook to complete the year undefeated at home on Sunday against Maryland at 1p.m. Prior to the match, the program will honor the contributions ofSundararaman in a ceremony.

“Marylandis a completely different team than Boston College with a very fast offense,”Lantagne Welch said. “We will have to get ready for their style. They alsoplayed us very tough the first time and we will take advantage of the one dayto get ready for them.”