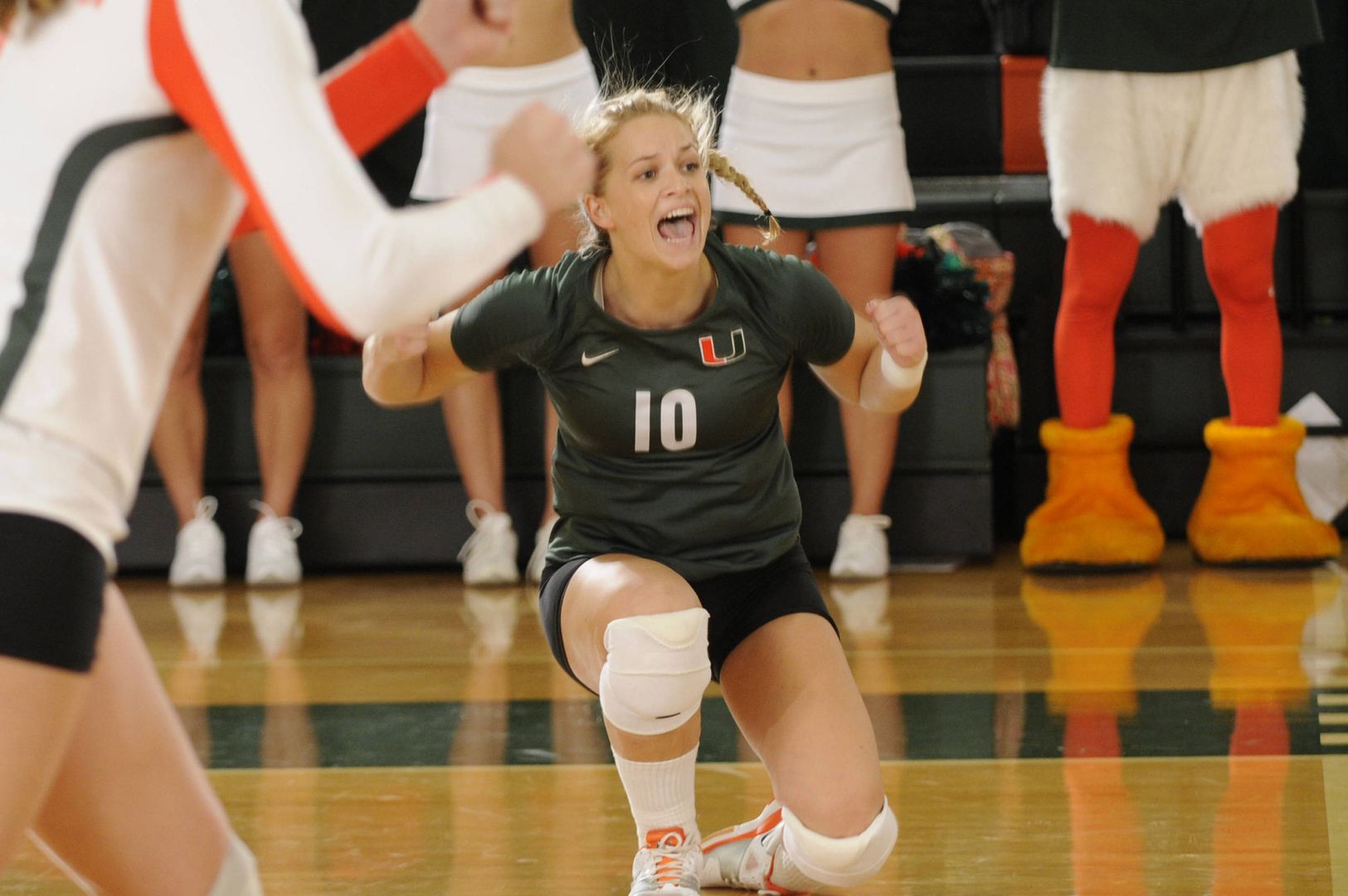 DURHAM, N.C. – Down 14-12 in the fifth anddeciding set, the University of Miami volleyball team fought back to win thenext four exchanges, fending off two match points, to defeat Duke, 3-2, on Saturdayinside Cameron Indoor Stadium. The Canes have now swept the season seriesagainst the Blue Devils the last two seasons.

“Ithought we were very sharp to start the match, which was one of our focusestonight,” head coach Nicole Lantagne Welch said. “Duke showed fight to comeback and we struggled for a couple sets. I was proud of how our team stayed composedand consistent in the fifth set, and we certainly came up with some clutch plays.The team displayed great resiliency.”

FiveHurricanes recorded double-digit kills, led by 19 from junior outside hitterTaylor Hollins. She also had a career-high 20 digs to pick up her 16thdouble-double of the season. Sophomore outside hitter Savanah Leaf (26 digs, 13kills) and junior right side Alex Johnson (13 kills, 10 digs) put up double-doublesas well. Johnson tied her career high with five service aces for Miami.

Juniorlibero Ryan Shaffer notched 26 digs in the back row to help hold DU to a .172hitting percentage, while senior setter Nrithya Sundararaman registered 50assists. Coming into the weekend leading the ACC with an average of 10.60assists per set, Sundararaman has posted at least 50 assists in five matchesthis season.

Upfront, the middle blocker combination of sophomores Emani Sims and AlexisMourning had eight and seven total blocks at the net, respectively. UM recorded16.0 total team blocks on the night. The duo also combined for 25 kills, as theCanes slammed down 12 more than the Blue Devils (70-58) in the match.

Miamistarted off strong with a convincing first-set win, 25-12. It was the second-leastpoints allowed in a frame this season. Leaf recorded five kills and nine digsherself, with defense holding Duke to a .000 hitting percentage.

Themomentum carried on to the second as UM went up 2-0 in the match. The set wastied at 20 before the Canes won five of the next six points behind a strongserving effort from Mourning. Sundararaman put down her only kill of the matchto send it into intermission.

Dukecame back a different team following the break, going up 17-10 in the third.However, Miami rallied to tie the set at 19 to get within striking distance ofa sweep. From there, the teams split the next six points to make it 23-23, butDuke took the next two exchanges to continue the match.

Thehosts also held an early lead in the fourth set, but did not allow theHurricanes to recover this time. A four-point Duke run sent the contest into afifth and deciding set.

TheCanes, who entered a fifth set for the fourth time this season, built an early7-5 lead, aided by four blocks. The advantage did not grow from there and theBlue Devils went on a 6-2 run to go up 14-12, having two match points insidetheir home arena. Staring down a defeat, Hollins then laid down a kill andJohnson placed an ace to even the set at 14. Hollins followed with two morekills off sets from Sundararaman to give Miami its eighth road win of theseason.

Itwas the first time this season that Miami overcame match point to win and theteam is now 4-0 in five-setters on the year.

Afterplaying the last two weekends in the state of North Carolina, the Canes willreturn to the Knight Sports Complex on Friday to take on Boston College at 7p.m. UM has won its last 16 at home dating back to last season.