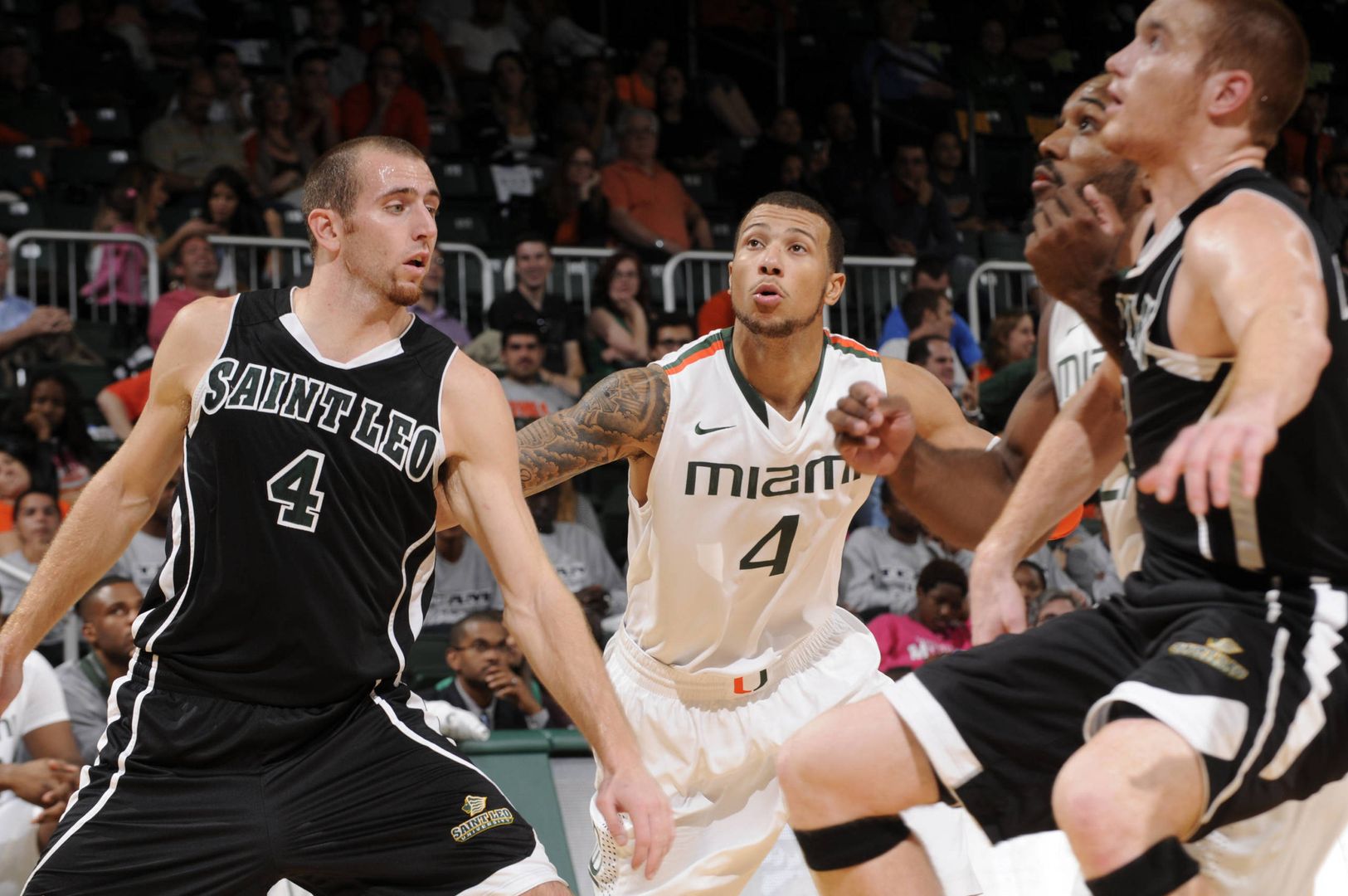 CORAL GABLES, Fla. – In a game that came down to the final seconds, the University of Miami men’s basketball team fell to Saint Leo on Friday night, 69-67.

Senior Trey McKinney Jones led Miami with 19 points and six rebounds, going 7-for-13 from the field. He went 3-for-6 from three point range in the second half, bringing the Canes to within moments of victory.

In a game that saw eight lead changes, Saint Leo went ahead 69-64 after a three pointer by Trent Thomas with 2:02 remaining. Following a three-pointer by Kenny Kadji at 1:46, the Canes missed four shots in the last 75 seconds to lose by two.

Newcomer Tonye Jekiri came off the bench to tally his first career minutes as a Hurricane, and Julian Gamble appeared in his first game since injuring his left ACL in the summer of 2011 and missing the entirety of last season.

Center Reggie Johnson played 13 minutes, going 3-for-4 with seven points on the night.

Rion Brown scored the first points for the Hurricanes with a three-point jumper off an inbounds pass from Shane Larkin, but the Canes fell behind early and trailed by as much as 10 points within the first four minutes.

Miami began the second half down by seven, 37-30. It began in much the same way as the first stanza, with Miami finding themselves in a 45-32 hole with five minutes elapsed. With 9:49 remaining, a dunk by Durand Scott (14 points, 4 rebounds, 2 assists) kick-started a comeback for the Hurricanes. A three from Rion Brown and a pair from Trey McKinney Jones drew the score within four with eight minutes remaining.

McKinney Jones’ final three tied the game at 56 with seven minutes left, the first time the Canes didn’t trail in the game. A pair of free throws by Erik Swoope with 5:22 remaining gave Miami its first lead of the game, 60-58.

The final four minutes saw a seesaw battle for the lead, but Saint Leo went ahead 66-64 off a three pointer by Trent Thomas with 2:34 remaining and Miami was never able to recover.

With the first games of the 2012-13 campaign less than one week away, it’s time to get your tickets for the Miami men’s basketball season. This year the Canes will host numerous high-profile ACC and nonconference opponents at the BankUnited Center in Coral Gables, so fans should call 800-284-2263 now to reserve your tickets.

Rion Brown scored the first points for the Hurricanes with athree-point jumper off an inbound pass from Shane Larkin.

Senior Trey McKinney Jones led the Canes with 19 points, six reboundsand one steal in tonight’s effort, going 7-for-13 from the field including3-for-6 from three point range.

Freshman Shane Larkin left the game with a lower extremity cramp with5:22 left in the second half. Larkin scored 10 points and recorded threeassists and one steal.

The first subs for the Hurricanes were seniors Julian Gamble who madehis way onto the court for the first time since the 2010-11 season. Alsosubbing in were guards Durand Scott and freshman center Tonye Jekiri with 15minutes left in the first quarter.