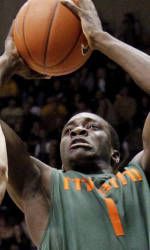 TALLAHASSEE, Fla. (AP) – Bernard James scored 15 of his 18 points in the second half and No. 15 Florida State snapped Miami’s five-game winning streak with a 64-59 victory on Saturday.

Michael Snaer had 12 points and Ian Miller finished with 11 for Florida State (17-7, 8-2 Atlantic Coast Conference), which bounced back from a disappointing 64-60 loss at Boston College on Wednesday.

The 6-foot-10 James went 7 for 8 from the field in the second half and matched his career scoring high. The 27-year-old Air Force veteran also had six rebounds, blocked four shots and added two steals while clamping down on Reggie Johnson, who managed only four points a week after scoring 27 points to lead the Hurricanes to a 78-74 overtime win at Duke.

The Seminoles had a 10-point lead on two occasions in the second half, the last at 53-43 with 6:51 left on James’ three-point play.

Florida State tried to go inside early, but that strategy didn’t work as James and Xavier Gibson were just 3 of 10 down low in the first half.

Florida State, which led 28-26 at halftime, has won six straight games in the series. The teams will meet again in Miami on Feb. 26.

At halftime, Florida State retired the jersey of Dave Fedor, who averaged 20.2 points a game during his college career between 1960 and 1962 and was the school’s first player selected in the NBA draft.

– The Canes are 28-39 against the Seminoles overall.

– After a pair of games without a trey, Malcolm Grant knocked down a three pointer in the second half at FSU.