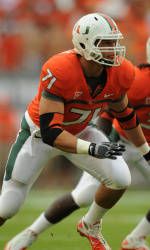 CORAL GABLES, Fla. – After standout campaigns in the 2011 season, Miami’s Denzel Perryman and Anthony Chickillo have been named to the Yahoo! Sports Freshman All-America Team. Perryman earned first-team honors, while Chickillo was named to the second team.

In his first career start against then-No. 20 Georgia Tech, Perryman recorded seven tackles, three tackles for loss and his first career sack. He would go on to start the final four games of the season for the Hurricanes, recording a career-high 14 tackles in the team’s season finale against Boston College.

Chickillo played in all 12 of Miami’s game this season, including starts in the final nine contests of the year. His five sacks were tied for the team lead, helping him to a third-place finish in ACC Defensive Rookie of the Year Award voting.

The Tampa, Fla. native finished the season with 38 total tackles, with his season-best effort coming at then-No. 21 Virginia Tech, where he had eight takedowns.