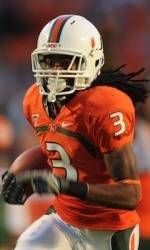 Benjamin led the Hurricanes against No. 2 Ohio State with 130 all-purpose yards. He returned a punt 79 yards for a touchdown, as he and Miller are believed to be the first duo in Miami history to return a kickoff and a punt for touchdowns in the same game. Benjamin’s punt return of 79 yards tied for the 10th longest in school history. It also marks his first career punt return for a touchdown and the first for Miami since Thearon Collier’s 60-yard punt return last season against Virginia.

The ‘Canes have off this week and will return to action on Thursday, Sept. 23 for another non-conference road game at Pittsburgh.