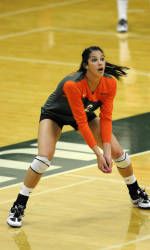 The opening set proved to be the most exciting for both teams, with Bethune-Cookman (2-10) taking an early 5-3 lead after a ball handling error charged to the `Canes. B-CU was led by Janeen Davis with four kills in the opening set.

Miami later countered with a 10-3 run that allowed the `Canes to take a 13-8 advantage behind the efforts of Christine Williamson and Ariell Cooke.

Williamson helped the `Canes with a set-high eight kills, adding a block assist, while Cooke provided four kills and two blocks (one solo). Miami would go on to collect the 25-17 win with kills down the stretch from Williamson and Cooke, as well as blocks by Katie Gallagher and Jenna Berkley.

Miami ran out to an early 7-1 lead in the second set, using four additional kills from Cooke to take a commanding 25-12 win.

It was in the third set that junior outside hitter Carico, a native of Manhattan Beach, Calif., placed the seventh of her nine kills in the match to etch her name into the UM record books as just the sixth player in UM history to achieve the honor – and the third-fastest to collect the achievement. Carico is now tied with Elizabeth Tyson (2001-04) for fifth all-time at UM in kills with 1,002.

The `Canes were efficient in the third set, striking at a .481 clip with 14 kills on 27 swings and just one error. In the match, UM hit .364 throughout the sweep. Miami took the third set and the match with a 25-8 advantage.

Miami was led by Carico, Cooke and Williamson with nine kills each, while Becker added eight kills in the win. Becker also finished with five blocks (assisted), and freshman libero Ryan Shaffer led the defense with a match-high 13 digs.

Miami will face FIU later this evening at 7:30 for what will be the championship match of the Hurricane Invitational. FIU defeated San Francisco, 3-1, in the second match of the day.

Live streaming of the Hurricane Invitational can be seen via All-Access on the hurricanes athletics website at REPLACE_ME.

For more information on the University of Miami volleyball team, please log on to www.hurricanesports.com.

Once there, you will find up-to-date news, stats and information regarding the Hurricanes volleyball program. You can also keep up-to-date with all UM Athletics via twitter at Twitter.com/HurricaneSports.