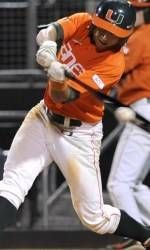 CORAL GABLES, Fla. – Senior first baseman Scott Lawson hit three home runs and finished with a career-high six RBI as the top-seeded and 11th-ranked University of Miami baseball team eased to a 14-1 win over No. 2 seed Texas A&M Saturday at the Coral Gables Regional at Alex Rodriguez Park. The Hurricanes recorded season-highs as a team for home runs (5) and hits (20), while two Miami pitchers held the Aggies to just four hits on the day.

Miami (42-17) scored in each of the first five innings, plating one in the first, two in the second, three in the third, four in the fourth and three in the fifth to take a 13-0 lead after five. The game was held up for a two-hour, 28 minute rain delay in the middle of the seventh and after play resumed, both teams plated a single run to close the scoring.

The Hurricanes will now face the winner of the Texas A&M-Dartmouth elimination game. The Aggies (41-20-1) and Big Green (27-18) will play at noon on Sunday for a chance to play Miami in the regional’s championship at 4 p.m. on Sunday.

Lawson finished the day 4-for-6 with a career-high tying four runs in addition to his six RBI. He became just the third player in Miami’s history to hit three home runs in a postseason game and the first since Kevin Brown accomplished the feat against Stetson on May 27, 2001.

In addition to Lawson’s big day, Stephen Perez went 3-for-5 with a homer, four RBI and two runs scored and Chris Pelaez went 2-for-4 with a homer and three RBI and a run. Yasmani Grandal, Harold Martinez, Michael Broad and Frankie Ratcliff all had two hits as seven of Miami’s nine in its starting lineup finished with multiple hits.

Chris Hernandez (9-3) turned in one of his best outings of the season, keeping the Aggies off the board in six innings of work to earn his team-best ninth win. The junior left-hander allowed just one walk and three hits while striking out seven of the 23 batters he faced before the rain delay ended his day. After the delay, Travis Miller came on to toss the final three innings, allowing just the one run to earn his first career save.

For the second straight game, the Hurricanes used the long ball to get ahead in the first, as Lawson hit his second solo shot of the regional to right to put Miami up one.

The `Canes made it 3-0 in the second inning, scoring a pair of runs on a RBI single to center by Perez followed immediately by an RBI triple to deep center by Ratcliff.

Lawson’s second homer came on the first pitch thrown in the third inning. That same inning, the `Canes loaded the bases and with two outs on the board, Perez smacked a single to left to move Miami’s lead to 6-0.

Four more runs came in for the `Canes in the fourth, highlighted by a three-run blast to right by Pelaez.

The `Canes scored for the fifth straight inning when Lawson’s third homer of the day – a three-run shot to right – put UM up 13-0.

Perez hit Miami’s fifth homer of the game and ninth of the regional with a solo shot to right in the bottom of the ninth, a half-inning after Texas A&M plated their only run on a Steven Martin RBI single.