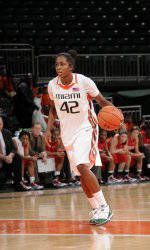 CORAL GABLES – Despite a game-high 28 points from Shenise Johnson the University of Miami women’s basketball team (16-11, 3-9) was unable to complete a dramatic comeback, falling to the No. 19 Georgia Tech Yellow Jackets (21-7, 7-5) by a 77-73 score, Sunday afternoon at the BankUnited Center.

For the fourth straight game and the 11th time this season – Johnson scored 20 or more points, but the Hurricanes dropped their fourth consecutive game – each by six points or less.

Georgia Tech led by 10 points, once in each half, but the ‘Canes battled back both times.

With 7:05 remaining, the Yellow Jackets took at 67-57 lead on two Deja Foster free throws. Over the next 6:16, Miami battled back to tie the game at 73 with just 49 seconds to go. Johnson fueled the comeback with eight points over the span, including the game-tying free throws.

On Tech’s next possession, Brigitte Ardossi was fouled and then hit both ensuing foul shots. Miami with a chance to tie or take the lead, turned the ball over on its final two possessions. Foster hit two free throws with one second remaining, for the game’s final score.

Ardossi finished with 27 points for the Yellow Jackets. Sasha Goodlett, Sharena Taylor and Foster each had 12, while Alex Montgomery added 10.

Riquna Williams – who scored 18 points – hit four of the Hurricanes’ eight three pointers, while Georgia Tech went 0-for-4 from beyond the arc. However, the visitors held a 48-30 advantage in the paint.

Johnson and Williams provided the scoring punch in the opening half. Johnson was 5-of-7 from the field, scoring 12 points, while Williams came off the bench and scored 15 straight points for the Hurricanes, before exiting the game with two fouls.

Georgia Tech opened the game by taking a 15-5 lead, but after a Katie Meier timeout and the entrance of Williams, Miami went on an 11-2 run and cut the lead to 17-16.

Johnson’s layup with 30 seconds to go in the half, gave the ‘Canes their first lead, but Ardossi responded with a layup of her own on Tech’s next possession – giving the Yellow Jackets a 35-34 lead at the break,

The ‘Canes will face the No. 10 Florida State Seminoles in their final road game of the season, Thursday, Feb. 25 at 7 p.m. Miami will return to the BankUnited Center on Sunday, Feb. 28 to face Boston College on Senior Day at 2 p.m.