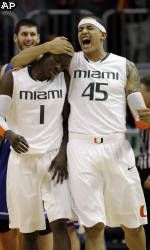 Duke outscored Miami 29-9 to start the second half and shot 9 for 15 from 3-point range after halftime.

Despite their poor starts, Smith finished with 21 points for Duke, and Scheyer scored 15 despite shooting 3 for 15. Dwayne Collins had 21 points and nine rebounds for Miami, and Durand Scott scored 19 points, just one point shy of his career high.

Scheyer was 1 for 12 before sinking 3-pointers on consecutive possessions for a 64-59 lead with five minutes left. Smith’s 3-pointer capped an 8-0 run that put the Blue Devils up 69-59, and the margin was at least five the rest of the way.

Duke went 9 for 10 from the free-throw line in the final 90 seconds to seal the win. The Blue Devils scored 56 points in the second half–remarkable considering that in the first 12 minutes, they shot 4 for 19 with seven turnovers and fell behind 23-12.

Smith was shut out for the first 18 1/2 minutes. Scheyer struggled even longer, finally scoring 24 minutes into the game to pull Duke even at 39.

Duke missed nine of its first 11 shots, and Miami scored 11 consecutive points–eight by Collins–for a 15-6 lead. Scott sank a runner at the buzzer to end the half to put the Hurricanes up 37-25, their largest lead of the game.

Singler made four baskets in the first 2 1/2 minutes of the second half to trim it to five, and his 3-pointer gave the Blue Devils their first lead since the early minutes at 42-41.

On next possession, Smith’s 3-pointer put Duke ahead to stay.