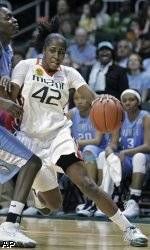 Shenise Johnson Leads Miami to Win Over No. 9 Tar Heels

Johnson had 25 points and 10 rebounds as Miami snapped a three-game losing streak with an 80-69 victory over No. 9 North Carolina on Thursday night.

“The last few games we felt as if we were carrying rocks on our shoulders,” Johnson said. “We definitely were very hungry coming off a three game losing streak.

“People don’t expect us to win but we do.”

Johnson also had six assists and tied a career-high with eight steals as Miami won its second game of the season over a ranked team. The Hurricanes defeated No. 13 Florida State Jan. 10.

“I just came out and did what I’ve been doing all my life,” Johnson said. “It kind of came easy.”

The Hurricanes broke a 61-61 tie with 10 consecutive points late in the second half. Johnson scored seven points during the spurt and her two free throws with 3:18 remaining capped the run. She opened the run, after swiping the ball away from UNC’s Italee Lucas at midcourt and driving to the basket for the go-ahead layup.

“Broken? That’s not this team, they’re too resilient,” Miami coach Katie Meier said of the team’s recent struggles. “I could tell that my team not just wanted to win but was very composed.”

Freshman Stefanie Yderstrom scored 13 points, going 6-of-6 from the line in the second half. However her most important play of the night came on the defensive end when she drew a charge at midcourt on the Tar Heels’ Lucas with 3:18 to go. UNC’s bench was whistled for a technical foul and Johnson sank both free throws, sealing the victory.

“We’re not quite the team that we usually are,” North Carolina coach Sylvia Hatchell said. “We just have to take more pride and keep working and hope come tournament time to make a run.”

But the Tar Heels could not add to the advantage and the Hurricanes retook the lead with an 11-3 spurt in the next 2:15.

“It’s very hard to lead North Carolina the entire game,” Meier said. “They always take it back to you. For us to sustain that with the youth that we have was so impressive.”

The Hurricanes led most of the first half after an 18-4 run capped by Shanel Williams’ field goal with 10:19 remaining. Miami increased its lead to 29-16 on Charmaine Clark’s short jumper with 7:40 remaining.

“Life in the ACC is strange,” Meier said. “We’ve now beaten two of the three ranked teams in the conference and dropped some games that we shouldn’t have. That’s the ACC.”

With the win, the Hurricanes became post-season eligible for the first time since the 2005-06 season. That season was also the last time that Miami won more than two games inside conference play.

Miami will face SIU-Edwardsville in the second of its three-game homestand on Sunday, Feb. 7 at 2 p.m. During half-time of that game two 40-inch HD televisions will be raffled off – just in time to watch the NFL Championship game later that evening.