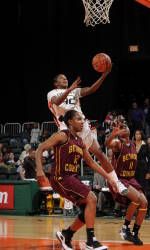 Shenise Johnson led Miami with 18 points on the day. The sophomore also was one of three Hurricanes to grab seven rebounds – joining Riquna Williams and Morgan Stroman for the team high. She also had a game-high seven steals.

However, Virginia Tech’s Nikki Davis had a career day to counter the Hurricane attack. Davis scored a career-high 29 points and was an impressive 14-of-18 from the free throw line. She also hit a career-best five three-pointers.

The Hurricanes and the Hokies both reached season-highs in free throws attempted in the foul-ridden contest. However, Miami was only able to convert on 67.6 percent of them.

Even though Williams and Johnson combined for only five points at the half, Miami held a 35-29 lead. Diane Barnes paced the `Canes early, scoring 10 first-half points. She ended the game with 14 points and five rebounds.

In the second half, Williams and Johnson stepped up their scoring – combining for 28 points after the break – but it wasn’t enough.

Miami went 9-of-21 from the field in the second half, going without a field goal for a stretch of over 10 minutes and it also gave up 44 points to the Hokies,

The Hurricanes head to the road for their next two games – at Georgia Tech on Wednesday, Jan. 27th and at Boston College on Sunday, Jan. 31st. Miami returns to the BankUnited Center on Thursday, Feb. 4 against the No. 14 North Carolina Tar Heels.