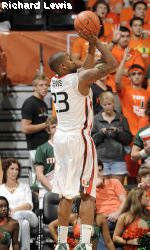 BLACKSBURG, Va. (AP)–Malcolm Delaney had 28 points and a career-high nine assists, and Virginia Tech raced out to a 35-point lead in the first half on the way to an 81-66 victory over No. 23 Miami on Wednesday night.

Terrell Bell scored all of his career-best 13 points in the first half for the Hokies (13-2, 1-1 ACC), who snapped a five-game losing streak to ranked teams that dated to last season. Virginia Tech went up 11-2 and then put the game away with a 35-8 run that spanned nearly 13 minutes of the first half.

Bell, who had scored in double figures only once this season, went 5 of 6 from the floor. He had never hit more than one 3-pointer in a game in his career, but connected on all three of his attempts–all in the first half.

Jeff Allen added 14 points and 10 rebounds for the Hokies, while Dorenzo Hudson had 11 points.

The Hurricanes had only one player in double figures. James Dews led Miami with 11 points.

Miami will look to get back on the winning track Saturday, Jan. 16, when the 23rd-ranked Hurricanes face the University of Virginia in Charlottesville. Game time is set for 8 p.m., with the game being broadcast live on ESPNU.