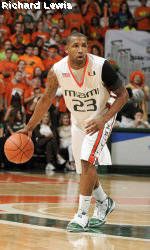 SUNRISE, Fla. (AP) – James Dews scored 15 points and the Miami Hurricanes had a big rebounding advantage to beat Florida Atlantic 87-69 on Saturday in the first game of the Orange Bowl Basketball Classic.

Dews scored all of his points in the first half, when Miami built a 43-23 lead. Dwayne Collins had 17 points and 14 rebounds for the Hurricanes, who enjoyed a 55-31 edge on the boards.

Miami had 24 offensive rebounds and shot 8-for-16 from 3-point range.

The Hurricanes improved to 11-1, with their lone loss a one-point defeat at Boston College on Dec. 6. They won for the 19th time in 20 games against the Owls.

Raymond Taylor had 23 points and seven assists for Florida Atlantic, which fell to 5-5. The Owls ran off 10 consecutive points early in the second half and closed the margin to 45-35 but could get no closer.