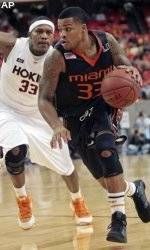 ATLANTA — Virginia Tech broke open a close game with a 14-0 run in the second half and beat Miami 65-47 in the ACC tournament on Thursday to keep the Hokies’ NCAA tournament hopes alive.

Malcolm Delaney made only 1 of 10 shots from the field but made 14 of 15 free throws to lead Virginia Tech with 17 points.

Adrian Thomas and Jack McClinton led Miami (18-12) with nine points apiece. McClinton hit a three-pointer with 1:38 to go in the opening half to set a school record with a trey in an ACC-long 33-straight games. Thomas finished with a game-high three three-pointers for the Hurricanes.

Before the game, McClinton was honored with the Skip Prosser Award, given anually to the ACC’s top men’s basketball scholar-athlete. During halftime, Thomas received the Bob Bradley Spirit & Courage Award, given annually to a male or female basketball player, coach or team administrator who has overcome significant injury, illness or adversity in life to become a valuable contributor to his/her program and university.