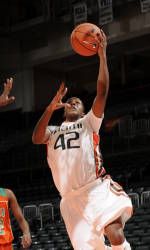 Second-Half Push Not Enough For Hurricanes

CORAL GABLES – The University of Miami women’s basketball team (11-10, 1-6) trailed by 17 points at the half against the Wake Forest Demon Deacons (14-5, 2-4) and fell just short in its comeback bid, falling by a score of 78-69 at the BankUnited Center on Sunday.

Standout freshman Shenise Johnson scored 12 of her career-high 22 points in the Hurricanes’ second-half surge. The Henrietta, N.Y. native played 37 minutes in trying to lead Miami in its comeback attempt.

Fellow freshman, Riquna Williams was the only other `Cane to score in double figures with 15 points. The Pahokee, Fla. native hit a team-high three three-point field goals and consistently attacked the lane against the Demon Deacons’ defense.

Briyana Blair, in her sophomore season, continues to play with intensity on both ends of the floor. On two occasions on the day, Blair drove into the lane, drawing the foul as she made the difficult shot. The Orlando native scored a career-high nine points in the game.

Wake Forest was led by Secily Ray and Corinne Groves who both recorded double-doubles. Ray went for 24 points and 11 rebounds while Groves scored 15 to go with 10 rebounds.

Most of Groves’ points came on second-chance opportunities in the first half. In that opening half, Miami gave up nine offensive rebounds, leading to 14 second-chance points. That, combined with a Demon Deacon 13-0 run, proved to be insurmountable for the `Canes.

For the game, Miami was outrebounded, 50-33 but Diane Barnes and Latoya Drake were able to tie for a team-high seven boards. Both players scored six points on the night.

The Hurricanes will travel to SIU-Edwardsville this Wednesday, Feb. 4 at 8 p.m. EST. Next Sunday, Feb. 8, Miami will face in-state rival Florida State at 3 p.m. For ticket information, please call 1-800-Go-Canes or visit hurricanesports.com.