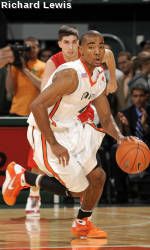 CORAL GABLES, Fla. (AP)–The Miami Hurricanes rallied from a 17-point deficit in the second half, and Jack McClinton sank a 3-pointer with 24 seconds left to beat Maryland 62-60 on Wednesday night.

Greivis Vasquez sank a pair of 3-pointers early in the second half to help the Terrapins take their largest lead at 52-35 with 12:30 to go. Miami came back thanks to seven 3-pointers, the last three by McClinton, who scored 18 points.

The Hurricanes (13-3, 2-1 Atlantic Coast Conference) won their sixth game in a row. The Terrapins (12-4, 1-1) lost in their first road game since Dec. 7. Miami has won four straight and six of its last seven meetings versus Maryland.

Lance Hurdle stole the ball from Eric Hayes and drove for a layup to give the Hurricanes their first lead, 59-58, with 1:17 left. Vasquez missed a pair of 3-pointers in the final 5 seconds.

Adrian Bowie scored a career-high 23 points for the Terps.

Hurdle also finished in double figures for the Hurricanes, scoring 10 points — including a pair of three-pointers in the final 7:58 and registered three assists. Dwayne Collins grabbed a game-high nine rebounds and dished out three assists as well.