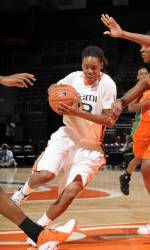 The Hurricanes knew they would be in for a high-intensity game when Georgia Tech game to the BankUnited Center, Monday night. In the first half, freshman Riquna Williams was up for the challenge, as she scored nine points off the bench. Unfortunately, she would be unable to score in the second period.

Williams’ teammates were unable to score very much after the break either. Miami shot just 7-28 from the field in the second half as well as missing 11 free-throws.

Adding intensity to Miami’s efforts was junior Diane Barnes, who led Miami with 11 points and sophomore Briyana Blair. Blair ended the night 1-7 from the free-throw line but she consistently attacked the Yellow Jacket zone defense to get the visitors into foul trouble.

Georgia Tech used a 15-0 run in the second half to take a 51-39 lead. During the run, the Yellow Jackets hit three consecutive 3-pointers, including two by Montgomery, while holding Miami scoreless for over five minutes.

Miami pulled within 51-48 on a basket by Epiphany Woodson with 6:36 left, but that’s the closest the Hurricanes would get the rest of the way as Georgia Tech closed the game on a 17-2 run.

The Hurricanes will head on the road for their next contest when they face Boston College at the Silvio O. Conte Forum, Sunday, Jan. 18 at 2 p.m. The Hurricanes return to the BankUnited Center on Thursday, Jan. 22 as they face NC State at 7 p.m. For ticket information, please call 1-800-Go-Canes or visit hurricanesports.com.