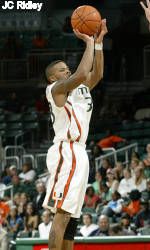 McClinton Leads Miami Past Mississippi State and to 9-0 Record

STARKVILLE, MISS. – Jack McClinton scored a season-high 29 points, including five three-pointers, to lead the University of Miami men’s basketball team to a 64-58 win over Mississippi State, as the Hurricanes remain undefeated at 9-0.

The Bulldogs (5-4), winners of 23-straight December home games entering tonight’s contest, took their largest lead of the evening, going up 56-51 on Barry Stewart’s fifth three-pointer of the evening with 5:29 to go. But Mississippi State turned the ball over three times over their next three possessions, and McClinton hit back-to-back treys to put Miami ahead, 57-56, with 2:42 on the clock.

Charles Rhodes converted a pair of free throws for MSU – their only points in the final five minutes – to reclaim the 58-57 lead with 1:38 to go. But McClinton responded by knocking down his third three-pointer in less than two minutes, to put the Hurricanes ahead for good, 60-58, with 1:26 remaining.

Dwayne Collins and McClinton converted all four free throw attempts in the final 1:12 to secure the ninth-straight victory for the Hurricanes.

Stewart and Jamont Gordon finished with 18 points apiece for the Bulldogs, while Jarvis Varnado posted a school-record 10 blocked shots.

The Hurricanes return to the BankUnited Center to open a three-game homestand versus Stetson on Monday, Dec. 17, at 9 p.m. The game will be broadcast on FSN-Florida.