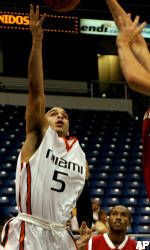 The fifth-year senior finished with a team-high 13 points, five rebounds and a game-high four blocks, while sophomore guard James Dews added 11 points – including three three-pointers – and five boards in his first career start. Junior guard Jack McClinton extended his double-figure scoring streak to 14 – the second-longest active streak in the ACC – with 11 points and a pair of assists, while freshman guard Eddie Rios dished out a career- and team season-high eight assists.

“We came out and played with great enthusiasm and energy,” said head Miami coach Frank Haith. “We wanted to get a lot of production in the paint and our post guys set the tempo early. Marist is a good ball club, but we played very well today.”

The Hurricanes (2-0) jumped out to the early 10-1 lead, and used strong defense – including three early King blocks – to keep the Red Foxes (1-1) without a field goal for the opening seven minutes. Sophomore forward Dwayne Collins came in off the bench for Miami and poured in eight points in two minutes to extend Miami’s lead to 12, up 21-9 midway through the half. Three-pointers by Dews and McClinton, as well as 9-of-10 shooting from the line, helped push Miami’s advantage to as many as 20 points in the period, as the Hurricanes took the 39-21 lead into intermission.

Miami continued to roll in the second half, outscoring Marist 18-3 – including back-to-back threes from junior guard Lance Hurdle – over the first seven minutes. All 11 Hurricanes who saw action in the game went on to score at least four points, and Miami would lead by as many as 34 en route to its second-straight win.