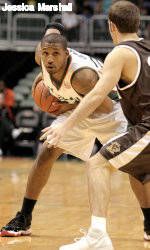 The victory was Miami’s most lopsided since defeating Savannah State, 105-64, on January 3, 2004, which also was the last game the Hurricanes surpassed 100 points.

The game was considered an exhibition for the Moccasins since II schools cannot play regular season games until November 15. Florida Southern will open its season November 16 against Henderson State.

The Hurricanes were never threatened after a 14-0 run early in the first half. McClinton and Thomas each hit 3-pointers during the run. Anthony King’s field goal with 10:53 remaining capped the spurt and increased Miami’s lead to 27-10.

Dews hit three 3-pointers later in the first half and McClinton scored seven consecutive points in a 31-second span during he final 1:11 as Miami finished the half with a 56-25 lead.

The Hurricanes finished the game with a 12-2 run in the final 3:50. Eddie Rios became the Hurricanes’ sixth double figure scorer after his layup with 41 seconds remaining.