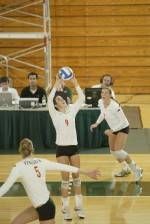 CORAL GABLES, Fla. – The University of Miami volleyball team lost its second match of the season to Maryland as the Terrapins downed UM, 3-0, Friday night at the Knight Sports Complex. In the loss, freshman setter Katie Gallagher became the first UM freshman and just the third player in school history to record 1,000 assists in a season.

“It’s a great honor for Katie to be in that group and to be the first freshman with 1,000 assists,” head coach Nicole Lantagne Welch said. “It says a lot for how hard she has worked and how she has developed during her freshman year already.”

Gallagher joins only Jill Robinson, who reached the mark on three separate occasions, and Mallorey James as the only Hurricanes to reach the milestone. She reached the 1,000 assist mark with her 10th assist of the night during the first game. She went on to record 39 assists in addition to adding four kills, an ace and seven digs on the defensive end.

“We hope to see a lot more of the same from her in the future,” Lantagne Welch added. “It was definitely a bright spot in an otherwise gloomy night.”

Genny Mayhew was the lone Hurricane with double-figure kills as she finished with 13. Bridget Bomhack ended the night with nine kills while Ciara Michel and Maria Andersson each tallied seven. Defensively for Miami, Cassie Loessberg collected 12 digs while Michelle Briun chipped in with seven.

The Hurricanes will return to the court Sunday when Boston College visits the Knight Sports Complex for a 12 p.m. match. The contest will be broadcast live via ACC Select at www.ACCSelect.com and can also be heard live on the University’s student network, WVUM 90.5 FM. Fans can also follow the match via GameTracker at www.hurricanesports.com. To access GameTracker, visit the team’s schedule on the Miami volleyball page. For tickets, contact the Hurricane ticket office at 1-800-GO-CANES.