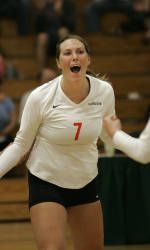 CORAL GABLES, Fla. – Bridget Bomhack finished with 11 kills and a career-high 25 digs while Genny Mayhew recorded over 20 digs for the fourth time this season as Miami defeated Virginia Tech, 3-2, Saturday night at the Knight Sports Complex.

With the win, Miami improves to 10-13 overall and 4-10 in Atlantic Coast Conference play while Virginia Tech drops to 12-12 and 6-8 in the league. The win also gives UM a season sweep over the Hokies, with the `Canes winning earlier this season in another five-game contest in Blacksburg, Sept. 20.

“I feel that our side-out game was much stronger tonight,” head coach Nicole Lantagne Welch said. “After game one we got in a rhythm, we kept them from making runs and we were able to answer by controlling the first ball to give us a lot of options offensively.”

Mayhew led five Hurricanes in double-digit kills with her match-high 22 while freshman Maria Andersson had arguably the best match of her career, recording a double-double with 16 digs and a career-high 16 kills. Angelica Ellis recorded 11 kills and Ciara Michel had 10 while Katie Gallagher finished with 57 assists, her second-highest total this year.

Bomhack, who also chipped in with five assists, two aces and three block assists, was one of four `Canes to record double-figure digs. Cassie Loessberg tallied 15 and Gallagher had 12 in addition to the 41 combined digs from Bomhack and Andersson.

“The biggest thing about this match was how balanced it was,” Lantagne Welch said. “When you have so many options and when you have five players in double-digit kills, its hard for them to pin-point a player to stop and I think that was huge for us.”

The Hokies were led on the offensive end by Taylor Parrish and Betsy Horowitz who finished with 20 and 18 kills respectively. Michelle Lang tallied 62 assists and Amanda Coyd had a strong night defensively with 29 digs. Felicia Willoughby and Lang played well at the net with nine total blocks each.

In game two, Miami got out to a15-9 lead before Virginia Tech tied it up at 21-21 with a 12-6 run. The `Canes would respond with a short 5-2 run to go up 26-23 and force a VT timeout before eventually tying the match up with a 30-25 win. Mayhew and Andersson led the way for UM in the game with a combined 10 kills while Ellis recorded three block assists.

The Hokies started off game four with a 9-6 lead before a five-point Miami run forced a Hokie timeout. The `Canes would keep the lead until Virginia Tech would tie it up at 13-13. Miami would go up 20-16 but Virginia Tech would respond with a 10-3 run to go up 26-23. UM would win the next three points to tie it at 26 and from there, VT won four of the final six points to tie the match up and force a fifth game.

Miami gained early control in the fifth game with a 9-3 lead and wouldn’t look back from there, claiming the 15-7 win to pick up its first home win since a 3-0 victory over Delaware, Sept. 8 in the championship game of the Hurricane Invitational.

The `Canes will make their second trip to North Carolina this season when they travel to play Duke and Wake Forest next weekend. Miami will take on the Blue Devils in Durham Friday, Nov. 2 at 7 p.m. before making a short trip west to face the Demon Deacons Saturday, Nov. 3 at 6 p.m.